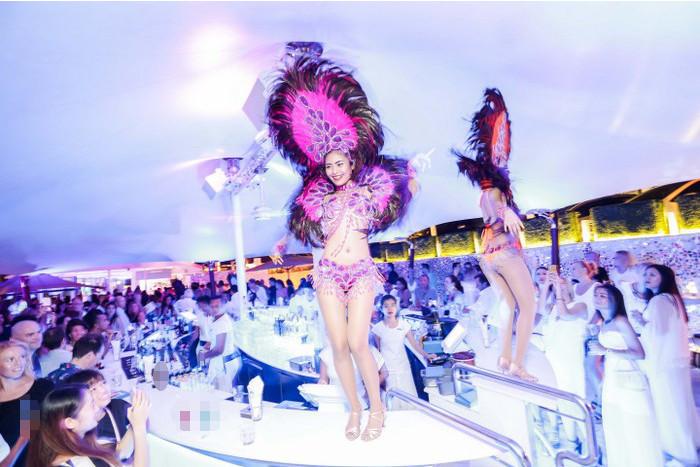 PHUKET: With the demolition of two of Phuket’s most iconic beach clubs on Surin Beach imminent, it’s time to pull out your sexy white clothes for Twinpalms Group’s ‘One Last Time’ beach party at 8pm on Saturday.

“It will be our last chance to say thank you to those who have enjoyed, over the years, the utopia that rose along the Surin Beach shore, as well as the incredible dedication from all our employees who made it possible,” Twinpalms Group General Manager Olivier Gibaud told the Phuket Gazette today.

With the opening of Catch Beach Club by Twinpalms more than a decade ago, Surin Beach became well-known as Phuket’s most exciting and fashionable beach, with Catch and Bimi leading the way in bringing fabulous dining and seaside experiences to beach lovers from around the world, Twinpalms explained in a statement to the press today.

The closure of Catch and Bimi comes as part of a government drive to honor the Royal family. Surin Beach was dubbed a ‘Beach of Honor’ by Phuket Vice Governor Chokdee Amornwat at the end of last year, making it the third category of beach in the island’s management system.

Though the beach is unique for being the only one in this category, it is managed in the exact same way as a virgin beach; umbrellas, beach chairs and vendors offering any other services or goods were banned on these beaches.

“This third category is set aside only for Surin, as HM King Bhumibol Adulyadej and HM Queen Sirikit visited its sands in 1959,” explained V/Gov Chokdee.

The beach clubs were among a number of businesses swept up in the National Council for Peace and Order’s (NCPO) campaign to ‘clean up’ Phuket beaches, demanding that local officials remove any and all illegal establishments from the beaches (story here). The campaign saw dozens of businesses receive eviction notices with a deadline date of June 2014.

Originally, only the parts of the clubs and businesses that extended to the beach side of the boardwalk on Surin Beach were demolished, with government assurance that the remaining structures would ‘most likely’ go untouched.

“Those buildings on the east side of the path at Surin Beach are fine. They are guaranteed to be legal; the Cherng Talay Tambon Administration Organization [OrBorTor] built them itself and rented them out to operators,” Cherng Talay OrBorTor President Ma-ann Samran said at the time (story here). “What I did say [at a Provincial Hall meeting] was that if the Army asked us to pull them down, we would have to – but at this stage we have received no such order to do so.”

Eventually, the request came and Mr Ma-ann complied. Though the request to remove the buildings was handed down about a year ago, legal complications have delayed their destruction until after the 2015-2016 high season.

The most recent demolition deadline was set for April 20.

The beach clubs, as well as the restaurants and other businesses on the east side of the Surin beachfront path, are occupying units originally built by the government. However, many of the units were modified, while other structures unassociated with them were built.

Post-tsunami, the Cherng Talay OrBorTor established 10 buildings on public park land next to the beach, each with two units, while the Phuket Provincial Administration Organization (PPAO) constructed 16 buildings paid for by the Overseas Economic Cooperation Fund of Japan.

The buildings were leased out to locals, who then allowed private businesses to operate at the facilities.

“We have decided, once and for all, to demolish the premises of private businesses encroaching on public land at all three of these Phuket beaches [Surin, Lay Pang and Layan]. The deadline for tearing down these buildings is April 20 for Surin Beach, and April 27 for Lay Pang and Layan Beaches,” Phuket Vice Governor Chokdee Amornwat told the Gazette last month (story here).

“We will issue letters to each business owner to inform them that they must vacate the premises by the stated deadline. On that date, the buildings will be demolished, regardless of whether operations have been shut down or not.”

Twinpalms Group, which has been operating Twinpalms Phuket adjacent to Surin Beach for almost 12 years now, has continued to comply with government requests since the beginning of the saga in 2014, explained Mr Gibaud.

“Everything in life comes, lives and goes, we are very thankful to have had the opportunity to delight and be in the memory of many Catch and Bimi Beach Club guests over the years. This chapter of Catch Beach Club is drawing to a close, everyone should be excited and look forward to the next,” he said.

The group has already gained traction with Palm Seafood Restaurant, Lounge and Bar on Bang Tao Beach and will be opening HQ Beach Lounge on Kamala Beach soon.

“A new ‘Beach Butler’ program is also being introduced at Twinpalms Phuket to further improve the soon-to-be virgin and pristine beach experience for guests on Surin beach,” Mr Gibaud said.