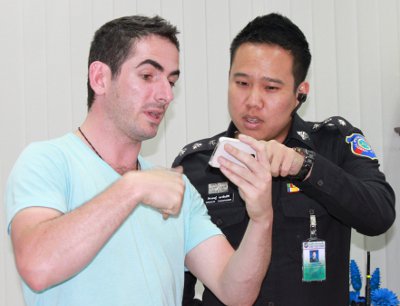 PHUKET: Two ferry crewmen were arrested and charged yesterday after CCTV evidence showed the pair stealing a laptop computer from a tourist travelling on their boat.

The victim, 31-year-old Australian national Evan Russell Darnley-Pentes, was returning with a friend from Phi Phi Island on Sunday when the theft occurred.

However, it was only after his return to Rassada Pier that he realized that his Apple MacBook Pro laptop had been taken from the front pocket of his bag.

Mr Russel approached staff of the two-deck ferry and requested to see footage from the boat’s security CCTV system.

The boat’s video showed that the theft occurred from the lower deck about 10 minutes after the Andaman Wave Travel ferry had departed Phi Phi Island.

Mr Russell recorded footage from the CCTV monitor using his own camera and reported the incident to the Tourist Police.

Acting on that information, the Tourist Police contacted the boat manager to have the suspects at the pier at 11am the next day when the Andaman Wave Travel docked.

Police meeting the boat identified two men they wished to question and took them into custody. After questioning the suspects, police escorted them to a computer shop at the Big C shopping center, where they said they had sold the laptop for the bargain price of 8,000 baht.

Base models of the MacBook Pro currently sell for 39,900 baht.

One of the men who confessed, Manus Jantra, 23, from Songkhla told the Phuket Gazette that he had only taken the laptop to sell at the computer shop.

“The one who took it from the bag was ‘Son’, whose real name I don’t know. He is about 20 years old and I don’t know where he is now,” said Mr Manus.

Another suspect Thawatchai Armah, 20, from Phang Nga, confessed, “I was trying to cover the CCTV camera on the boat while the robbery was being done.”

Both Mr Manus and Mr Thawatchai have been charged with collaborating in robbery. The shop owner himself is now facing charges of receiving stolen property.

The boat manager told Tourist Police that there had been many cases of theft from passengers in the past.

Unfortunately, most tourists didn’t want to go through the time and trouble of reporting the theft of inexpensive items to the police, he explained.

“It was good to finally catch the suspects,” he said, adding, “The boat doesn’t have enough evidence [collecting equipment] to prove which member of staff actually committed the thefts.”

Mr Russell and his partner are staying at hotel in Kalim and plan to travel back to Australia on September 14.

Capt Siramate Thanapansiri, of the Phuket Tourist Police, told the tourists that with the evidence they had against the criminals, it would not be necessary for Mr Russell to appear in court as a witness.