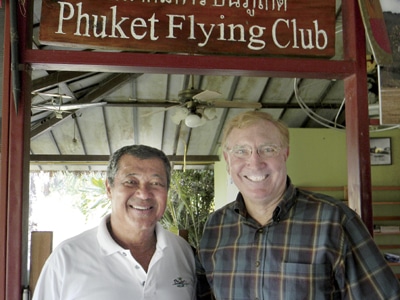 PHUKET: Suchard ‘Robert’ Raksangob wants to share his enthusiasm for flying airplanes with visitors and residents of Phuket.

On Saturday, September 15 from 3pm, he’s inviting anyone with an interest in aviation to join him at the Phuket Airpark in Pa Klok where they can join the Phuket Flying Club.

“I flew for more than 25 years with the Thai Flying Club out of Bangphra Airport at Sri Racha and thought that Phuket would make an even better location for private aviation as the island is surrounded by so much natural beauty,” he says.

Currently, there are six flying clubs around Thailand. The beautiful Phuket one, which Robert built on 124 rai of land about 5.7 kilometers east of the Heroines Monument, boasts a luxurious grass strip and an atmosphere reminiscent of a fine golf course. It’s a barnstormer’s paradise.

“My original plan included housing and community developments with the runway as the central feature. Other parts of the plan included condominium units; private homes with hangars, many on canals; and a Fixed Based [airport service] Operation (FBO), which [would] offer flight training and maintenance services.”

Over the past several years, he’s invited flying enthusiasts to join the local flying club where they can qualify for a license to fly and learn how to reach the most scenic areas around Phang Nga Bay and the rest of the Andaman region.

The club currently has about 50 members and many, many visitors, particularly on weekends.

The President of the Phuket Flying Club, which is currently the primary tenant at Phuket Airpark, is retired Thai Airways Captain Watana Thinphanga. An environmentalist, he encourages local small aircraft pilots to watch for threats to the ecology – not only in Phuket, but throughout the Andaman – and to report their sightings to the club for action by local authorities.

An important member of the club is Pat James, an American pilot who flew helicopter missions during the Vietnam War. After he finished his second enlistment, he returned to his native Texas and set up his own FBO in Dallas at Love Field. Over the next twelve years, he expanded his services to Corpus Christi and Atlanta, Georgia.

By the late 1980s, Pat sold his aviation business and began consulting in Asia, first in Papua New Guinea and then in Myanmar, running helicopter services in remote areas to assist in oil and exploration projects. He is now based here and maintains his office at the Airpark.

The dynamic trio of Robert, Pat and Capt Wattana offers a package of talent, experience and local knowledge that would benefit any novice pilot.

There are three flying clubs in Singapore and four in Malaysia. I anticipate that in the future we will have many more fly-ins and air shows, and will be able to offer, among other things, seminars and visits to the control tower at Phuket International Airport,” noted Robert.

While the future of small-craft aviation looks promising for Phuket, Robert says that he is currently in negotiations to sell some of the land at the Airpark to enable extension of the runway (to 700m, from its current 500m) and to expand the services currently available to pilots and visitors.

“I’m looking to sell 15 rai to take care of what is owed on the property and to develop it further. Recently, I’ve had significant interest from several property developers who want to buy the entire Phuket Airpark for housing, as the land is flat, beautiful and has lots of water.

“But I’d much prefer to have the Phuket Flying Club and all its members, friends and activities continue to be based here. I think general aviation has a great future in Phuket,” he concludes.

Phuket Lifestyle: Feeding the gypsy in you