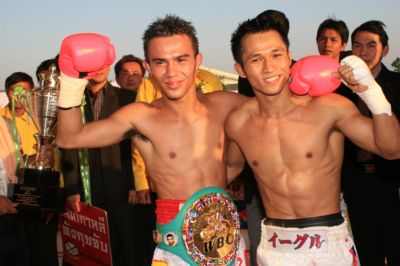 PHUKET CITY: Boxing fans are in for a treat on Wednesday afternoon when undefeated WBC minimum-weight champ Oleydong Sithsamerchai (26-0, 10 KOs) makes his first title defense against 15th-ranked Junichi Ebisuoka of Japan. The 12-round title bout will take place at Saphan Hin. Admission is free of charge.

Oleydong, whose real name is Kittipong Jaikrajang, is the pride of Rassada district in Trang province. He wrested the title from Japan-based compatriot Eagle Kyowa in an upset, unanimous-decision win in Bangkok on November 29 last year.

Oleydong has had one warm-up bout since, stopping winless Indonesian fighter John Cut Siregar in four rounds in a non-title fight in Bangkok on March 28.

It will be the first title fight for the 27-year-old Ebisuoka (17-10-3, 7 KOs), who is currently ranked number six in Japan’s light flyweight division.

Also on the fight card are four 10-round matches, the first of which will start at 3 pm:

Medngoen Kratingdaenggym knocked out current WBC super featherweight champ Manny Pacquiao in three rounds in Nakhon Sri Thammarat in 1999, one of only three losses in the career of the Filippino superstar.

There will also be several Muay Thai fights on the undercard.

On hand to kick off the event will be Phuket Governor Niran Kalayanamit and Phuket Provincial Organization Administration (OrBorJor) President Paiboon Ubatising.

Huge crowds are expected for the event, which will be televised nationally on Thai TV Channel 7.

The WBC-sanctioned event is being presented by the OrBorJor and Phuket Boxing Association, and is promoted by Wirat Wachirarattanawong of Petchyindee Boxing Promotions.