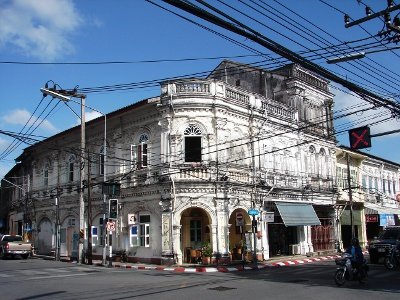 PHUKET: Municipal workers will start pulling down power poles along Thalang, Dibuk and Theprasattri Roads in the Old Town by November if all goes according to plan, the Phuket City Mayor has announced.

Speaking at a meeting at Provincial Hall last week, Mayor Somjai Suwansupapana said that stage two of the project to install all power and telecommunication cables underground in the Old Town was ready to to begin.

So far, the feedback has been positive, with most people living in the area satisfied with the project, Mayor Somjai said.

The project also requires involvement from the TOT, the CAT and TT&T, as telecom cables belonging to these companies will also be installed underground, said Mayor Somjai.

Work will start with the PEA burying cables along Dibuk Road in June, with Krabi Road, Phuket Road and part of Thepkrasattri Road next in line.

“The work to be done will be much like that already conducted along Thalang Road,” Mayor Somjai said.

“However, the project will be more complicated along Phuket Road and Thepkrasattri Road because high-voltage power cables are involved and need to go underground as well,” she added.

“Before work on stage two begins, we will hold another hearing to make sure all the people and agencies involved have a clear understanding of what is being done and the effect the project will have on the area,” Mayor Somjai said.