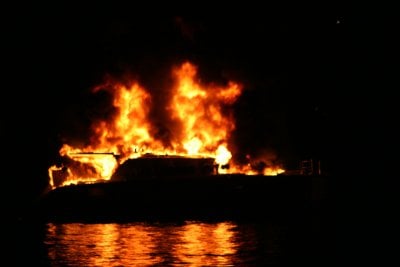 PHUKET: Quick action by the crews of a Phuket dive-boat and another vessel saved the lives of seven foreigners when their chartered catamaran caught fire and sunk in the waters off Koh Rok last night.

The crew of the Sailing Yacht (SY) Diva Andaman were interrupted during their beach barbecue on Koh Rok, an island about 30 kilometers southwest of Koh Lanta, at about 9pm yesterday when flames were seen aboard a catamaran anchored nearby.

The crew quickly launched a dinghy and headed out to fight the fire. However, before any action could be taken the fire had spread and the vessel was consumed by the flames.

The crew of SY Diva Andaman successfully rescued four people from the stricken catamaran, who had escaped the blaze by jumping into the sea.

A further three were pulled to safety by a dinghy launched from another nearby boat.

All seven survivors were transported safely back to Koh Rok where the National Park Rangers looked after them.

Yannick Mazy, the Executive Director of Diva Marine, told the Phuket Gazette, “The sailing catamaran completely burned down. I don’t know who the owner is, but the passengers aboard were foreigners who told me they had chartered that boat.”