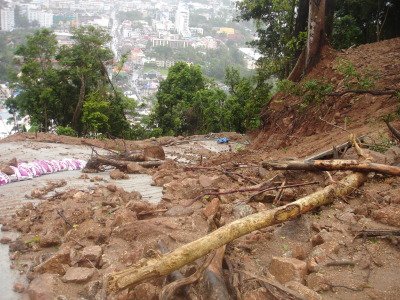 PHUKET: A landslide at a Phuket construction site for a shrine to the goddess Guanyin sent large boulders tumbling down a steep hillside yet again yesterday.

No injuries or deaths were reported in the incident.

Patong Department of Disaster Prevention and Mitigation officers this morning visited the area after a busy weekend responding to floods and other landslides caused by recent heavy rains.

Accompanied by construction workers, the officials traveled to the site in four-wheel-drive pickup trucks with the goal of assessing the situation and building barriers to prevent further erosion.

The landslide covered sections of a recently completed access road which connects the construction site with Phra Baramee Road.

“Luckily the road down the hill was finished, because it acted as a kind of barrier preventing the landslide from affecting buildings below,” a reliable source told the Phuket Gazette today.

However an inspection of the steep new road, built in sections with reinforced concrete, revealed cracks and other damage indicating that its base had already been compromised by subsurface erosion.

Yesterday’s slide was not the first such problem at the site.

In June, a backhoe operator working on the road sent boulders – one weighing about two tons – crashing into the upscale L’Orchidee resort. The owner of the construction company said his employee was “unaware” there were buildings on the hillside below him.

Resort Public Relations Manager Wassana Yukhunthon told the Gazette today that the case is currently being handled by the company lawyer.

“They [the construction company] are refusing to take responsibility for the problem and the damaged property, so our lawyer is working on it. “

We have had to close five villas next to the cliff for three months because we are afraid more rocks might tumble down. Owners of these villas are now forced to stay in other parts of the resort,” Ms Wassana said.

TAT targets timeshare use of logo