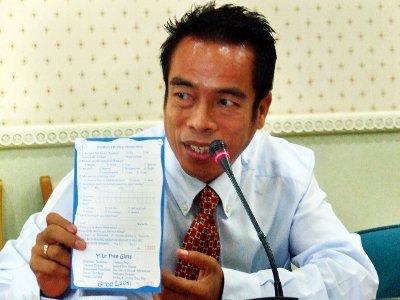 PHUKET: The Tourism Authority of Thailand (TAT) has warned businesses and operators that it would consider legal action against those counterfeiting or imitating their seal and initials.

The move is intended to be a warning shot at illegal timeshare companies in Phuket.

The statement signed by TAT Governor Suraphon Svetasreni appeared on the TAT News Room site on July 26, only weeks after the first meeting of a high-powered Phuket taskforce assigned to tackle the scamming of tourists by local operators.

Pamphlets handed out by some of the companies being investigated bore the TAT logo.

“The TAT has its seal and initials in English and Thai registered with the Trademark Office, Department of Intellectual Property, as a service mark according to the Trademark Act B.E. 2534 (1991).

“If it is found by examination or other means that there are any violators against the TAT under the Act, the TAT is obliged to consider pursuit of the case in a court of law. Please be informed accordingly,” it added.

“The TAT has registered its seal and initials in both Thai and English for a long time, but recently many tourism companies have used them or similar designs on packaging. These actions confuse tourists and discredit us. Tourists sometimes misunderstand that these companies are run by the TAT,” said Bangonrat Shinaprayoon, director of the Tourism Authority of Thailand (TAT) regional office in Phuket.

“I would like to inform these companies that we will file a court case against them if we find any illegal use of our logo or initials. I would also like tourists to take note of what they see and determine whether a printed seal is authentic or not.

“Anyone who would like to use our seal and initials must ask for permission.

“If you have any doubts about whether the company whose services you are using has permission to use our logo or initials, call us at 076-212213,” she added.

Patong Deputy Mayor Chairat Sukkaban, who is on the Phuket illegal timeshare taskforce, had his own views on how effective the threat of legal action might be.

“The registration of the TAT logo as a trademark will help the situation regarding illegal timeshare companies in one way, but it isn’t going to be a game changer. Progress in these situations takes action and cooperation from many parties.

“The trademark is definitely useful, but the problem is that the TAT does not have the manpower to conduct ongoing checks regarding the illegal use of their logo,” Mr Chairat said.

“I can only speak for myself when I say that it is wrong and I want to fight against it [illegal timesharing], but not everyone would agree.

“At the Tessabaan [municipal] level, people above me may not hold this issue as a priority,” he said.

“It is an ongoing process. If the people of Phuket and Patong believe it needs to stop, they know my stance on it and can consider it at the next election,” he added.