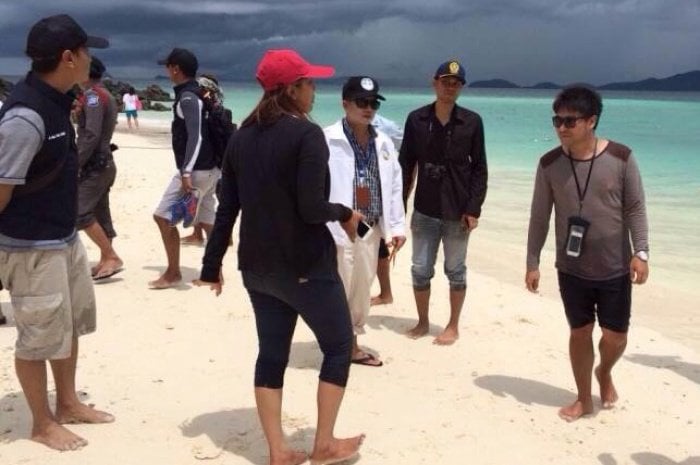 PHUKET: Officials are threatening to shut down a tour company if it is found allowing tourists to abuse marine animals – again.

The news follows tour guide Akung Saewang being caught with a group of tourists who were holding a reef fish trapped in a plastic bag (story here). Mr Akung’s tour guide licence had been suspended pending a meeting at the Ministry of Tourism and Sports (MOTS) Phuket office, which was held on Tuesday.

“We have given Joel Thai and Mr Akung a warning letter. If we find Mr Akung doing this again, his guide licence will be revoked,” said Santi Pawai, director of the MOTS Phuket office, after the meeting on Tuesday. “We will also close down Joel Thai.”

“The company and Mr Akung promised that they will teach other tour guides to instruct tourists about how to interact safely with the environment and make sure their customers do not abuse any animals.”

Joel Thai was also ordered to attended a marine animal abuse awareness meeting, to be held tomorrow at 2pm at the MOTS Phuket office.

“I will attend the meeting to see what they teach their tour guides and what rules they set in place,” Mr Santi said. “Joel Thai is allowed to invite other companies to join the meeting.”

Mr Santi wants all tour companies to take this incident as an example of how not to conduct their business.

“I will call relevant officers together to further discuss what needs to be done to prevent animal abuse in the future,” he said. “It is the responsibility of tour guides to make sure tourists know what they can and cannot do.”

Mr Santi said the idea of pressing charges against tourists for abusing animals would also be raised in the meeting. He did not specify exactly when this meeting would be held.