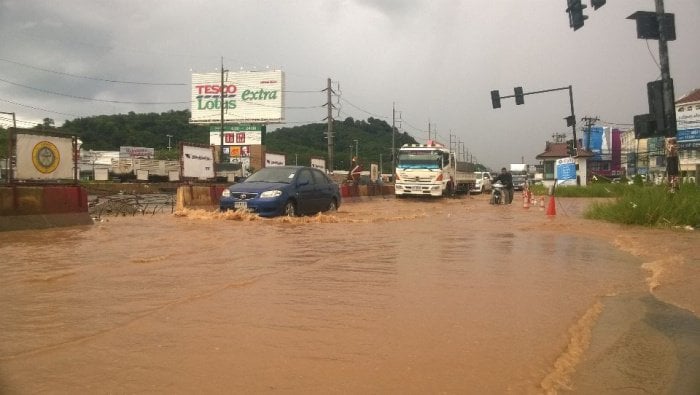 PHUKET: Flooding caused by routine seasonal rain at the construction site of Phuket’s second underpass this week forced officials to hold an emergency meeting at the Phuket Highways Office (PHO) on Tuesday.

“We are planning to install more pumps at the Samkong Intersection site,” confirmed Samak Luedwonghad, director of the PHO.

Two of the four pumps used to help clear flash floods have been broken, and workers were forced this week to clear debris and rubbish from drain gates during the flooding.

“With more operating water pumps we can help prevent flooding and the [enormous] tailbacks that have occurred as a result,” Mr Samak said.

After several delays, the 850-million-baht underpass was re-scheduled, contractually, for completion this month (story here), but is now “expected” – officially, if not publicly – to be completed at the end of this year (story here).

Chalermpol Wongkiattikun, project manager from the Department of Highways, assured those at the meeting that flooding would not be a problem once the flood prevention system was installed in the underpass.

“Additionally, after the underpass project is done, we will spend a month installing more drains along the road,” explained Mr Chalermpol.

“Vehicles will be able to use the underpass while we are working on the drains.”