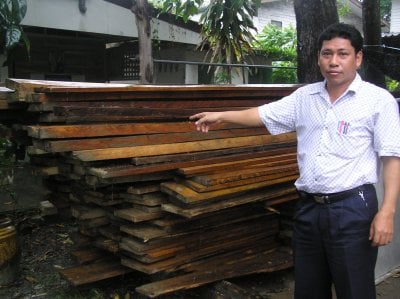 KOH KAEW: A team of government officials recovered hardwood planks valued at an estimated 1.5 million baht from an illegal logging and wood processing operation on forest conservation land in the Phanthurat Hills on Wednesday morning.

The loggers, tipped off to the operation by a helicopter surveying the area before the raid, used their knowledge of the difficult terrain to evade capture.

Some 30 staff from the Phuket Provincial Forestry Office, and the Phuket offices of the Ministry of Natural Resources and Environment (MNRE), and the National Parks Department took part in the operation, in Koh Kaew’s Village 2.

They described the site as mixed deciduous forest, home to native hardwood trees such a ta kien and maka, as well as introduced rubber trees.

Officials estimated that between 30 and 50 large hardwood trees – in one of the few extensive stands of virgin forest left on the island – were felled to produce the planks.

Highly valued by the construction industry for their strength and durability, the planks would have fetched as much as 1.5 million baht on the black market, they added.

Some of the deforestation was visible from the access road to the British Curriculum International School, they said.

The logs were trucked to the MNRE’s Phuket office near Saphan Hin, where they are now being held as evidence.

Phuket MNRE Chief Tongchai Saowapong said his agency had already filed a criminal complaint with the Phuket City Police, who are now responsible for tracking down and arresting the culprits.