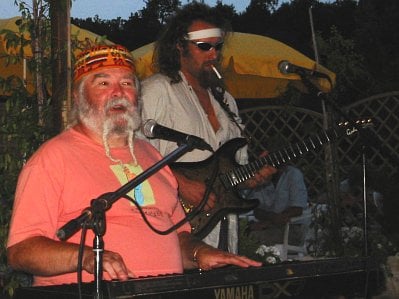 KARON: British Blues legend Victor Brox, who arrived on the island yesterday for the Phuket Blues Festival tomorrow and Saturday, says that island-based musicians proficient in playing blues are welcome to join him on stage.

Asked about his reputation for jamming with a lot of people, Brox said, “There’s a Welsh guitarist on the island [Rob Davies] that I’m going to play with. I brought my own bass player, but I’m open to playing with others.”

He also said the current gloomy weather doesn’t bother him, and should not worry the audience either.

Denying that he would be swapping his trademark woolly hat for a sou’wester, he told the Gazette, “You know they’ve hired a huge marquee and, apparently, good weather is forecast in the next few days.”

Organizer Andy Andersen told the Gazette that the marquee is large enough to hold around 1,000 people, but he advised blues lovers to get to the venue, at the Hilton Phuket Arcadia Resort & Spa, early, in order to get good seats.

He confirmed the program as follows:

The festival is presented by HotelTravel.Com and the Phuket Gazette.