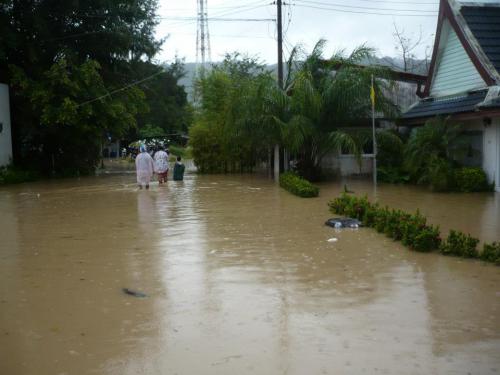 PHUKET: Officials at Kamala Beach have completed their mop-up operation after the town was struck by a flash flood on Sunday, but have warned residents that more flooding may be on the way.

“More than 20 homes were flooded by mud and water, but now the situation is back to normal,” said Krittkraisee Khieowan, Chief Administrative Officer at the Kamala Tambon Administration Organization (OrBorTor).

The heavy rains on Sunday also flooded a hotel and caused a small landslip.

“We ordered officers to help clean houses and excavate debris that blocked drains and storm-water ditches in the area. We also set sandbags around homes to prevent them from flooding further,” he said.

Chaidith Tantipanwadee led fellow Kamala OrBorTor officers in their two-hour effort to clear a large thicket of bamboo that had fallen across Hua Khuan Road.

“We also cleared the roadside ditch so that floodwater could run off easily and leave the road clear for motorists,” Mr Chaidith said.

The flooding of Kamala resulted from a simultaneous combination of heavy rain and a high tide, he added.

“All the rainwater on the ground could not run off into the canals as usual because they were already full – the high tide was keeping the water in them from flowing freely into the sea,” Mr Chaidith explained.

Mr Krittkraisee told the Phuket Gazette that officers are on standby at the Kamala OrBorTor, ready to provide assistance 24 hours a day.

“We have a team of officers monitoring the situation and we have warned local residents to be prepared for more flooding.

Storms and rain set to continue until Sunday