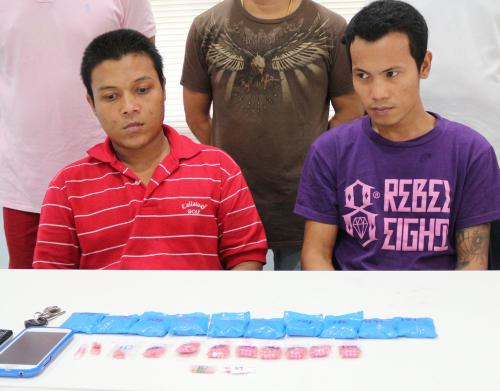 PHUKET: The trend for local drug dealers to source their product from a kingpin operating out of a maximum-security prison was evident again this week as Crime Suppression Division (CSD) officers in Phuket arrested two suspects found in possession of 2,336 pills of ya bah (methamphetamine) in raids north of Phuket Town on Monday.

Undercover police learned of a dealer selling ya bah in Phuket Town for 1,800 baht per 10 pills, CSD officer Seksan Komsakorn said on Tuesday.

“Officers set up a deal to buy 30 pills for 5,400 baht. They were told to pick up the drugs at a house in Rassada,” Lt Col Seksan explained.

They made the rendezvous, where they arrested Khajorn “E” Jantasri, 30.

A search of the house led the officers to seizing 370 more pills in a plastic bottle on a desk in Mr Khajorn’s bedroom.

Mr Khajorn told police that he got the drugs from a man he named only as “Mr R”, who Mr Khajorn said was an inmate at the maximum-security Nakhon Sri Thammarat Central Prison.

During questioning, Mr Khajorn revealed that he had asked his friend Jamroen “Euer” Sawangwit, 28, to hold the remainder of his stash at his house, also in Rassada, police said.

Both suspects were charged with possession of a Category 1 drug with intent to sell, he added.

Phuket Police in August arrested two suspects who said they bought their drugs from an inmate at a prison in Nakhon Sri Thammarat (story here).

A week later, police in Krabi arrested a man in that province who also said he sourced his drugs from an inmate at a prison in Nakhon Sri Thammarat (story here).