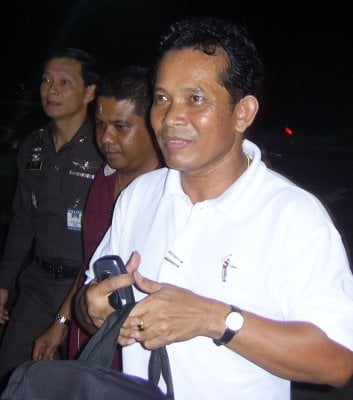 PHUKET CITY: Police this evening arrested the Chief of the Finance Division of the Phuket Provincial Financial Office, Apichart Nooprod, as the ringleader in the theft of more than 2 million baht of tsunami aid money, which was reported missing on February 15.

Apichart, from Nakhon Sri Thammarat, has denied the charge, and was tonight undergoing questioning at Phuket City Police Station.

He told members of the press after his arrest, “I have done nothing wrong. I am not scared because I did not do it.”

Phuket Police Station Superintendant Col Paween Pongsirin said the police had been working hard on the case since the theft. He declined to give details of the investigation, saying, “We need to be careful because at the moment we have only one person under arrest.”

He said that the next step would depend on what was learned during the interrogation of Apichart.

But he added, “From witness statements and other evidence we are sure we have done the right thing.”

The money, 2.05 million baht, went missing from a metal trunk in a locked room at Phuket Provincial Hall.