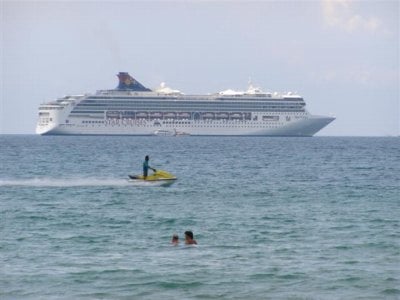 PHUKET CITY: Destination Air seaplanes landing and taking off near the Amari Coral Beach Resort have left government officers in a spin about what to do with complaints about noise, safety and even fuel left floating in the planes’ wakes.

“I filed the complaints with the Governor’s Office for consideration, which led to our initial meeting to discuss the matter on December 21.”

However, Phuket Vice-Governor Smith Palawatvichai said, “Seaplanes of Destination Air Co Ltd have permission from the Department of Civil Aviation [DCA] and Phuket International Airport [PIA] to land at predetermined points from November 11, 2007 to January 17, 2008, under nine conditions.”

The permit has been continued, he added.

“The sixth condition stipulates that the seaplanes cannot fly over communities or in no-fly zones, but I think they also have to avoid areas such as Patong Beach,” he said.

However, the permit does not specify the exact locations of the 31 take-off and landing points.

“This case is new for Phuket. We cannot just ignore complaints, nor can we ban the seaplanes from flying because they have permission,” V/Gov Smith said.

“We have to set rules. We have received complaints, but the seaplanes are allowed to fly in Phuket, so I cannot charge anyone.

“I worry that if there were an accident between a seaplane and a boat, diver or swimmer, I wouldn’t know under which acts I could charge people.”

Pat James, Managing Director of Destination Air Co Ltd, explained that before landing the pilot is required to survey the landing spot and report to air traffic control whether he is clear to land.

Also, the pilot, with permission from the nearest air traffic control, has the authority to deviate from the scheduled flight path, he added.

However, Mr James said he would instruct his pilots to land further away from the shore and any hazards such as boats, but they will still land in Patong Bay.

It was agreed that the officers at the meeting would on Saturday be taken aboard a Destination Air seaplane and be shown in person exactly where the aircraft land – at no charge.