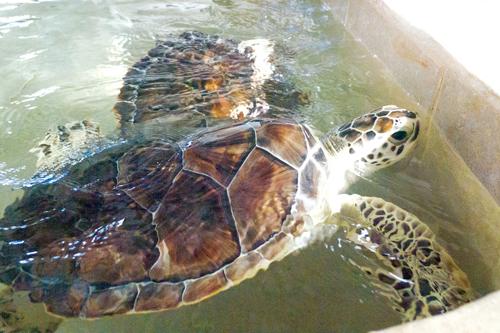 PHUKET: At the end of the 18th Century, and just after the bloodbath of the French Revolution, Coleridge wrote a narrative poem called “The Rime of the Ancient Mariner.” A wonderful poem in its own right, it contains a pertinent lesson for our time. It chronicles how a sailor shot an albatross, a pervasive harbinger of good luck, thereby shattering the sacred bond between man and nature, and thus incurring the fury of the elemental spirits. Forced to wear the dead bird around his neck, the mariner endures several terrifying ordeals including the loss of his entire crew.

At length, he blesses some water snakes in an “acte gratuit“, thereby showing he has intuitively reestablished a sense of kinship with even the lowliest of natural creatures. He is “shrived” (forgiven) by a holy man, and returns to civilization. The poem concludes: “A sadder and a wiser man / He rose the morrow morn.”

The 21st century albatross is fortunately still alive, but alas not so well. This magnificent bird with a maximum wing span of over ten feet and a capacity to circumnavigate the globe, is still suffering at the hand of man, from man’s exponential misuse of the planet.

Every year more than 100,000 die, many from ingesting hooks from baited long lines. You could add that overfishing, loss of habitat, plus the introduction of rats and feral cats to many far flung islands, have also been major factors in this decline. Whatever the reason, of twenty-one species of albatross, nineteen are now endangered.

Consider this. There is a small atoll, only 2.4 miles square, in the North Pacific Ocean, midway between America and China, which the globe-winging albatross regards as a haven, a staging post remote enough to rear its single chick. A good choice? It once was. But now twenty tons of debris is deposited on Midway Atoll’s beaches every year. It comes, as it does on Phuket’s shoreline, from ships’ refuse, from offshore dumping, from litter discarded on beaches, from waste carried down rivers or simply allowed to seep into the ocean. Of this squalid gift, five tons is plastic.

The albatross, which feeds at night and principally on squid and krill which swim close to the surface, frequently mistakes the bobbing, brightly colored bits of plastic for food, and ingests them. Many of these items are, needless to say, plastic lighters.

And here’s the rub. The adult albatross, and 70 per cent of the world’s entire population of Layan albatross breed on Midway, regurgitates these objects and feeds them to its chick. But this fledgling cannot regurgitate such alien things until it is nearly five months old.

The indigestible and often toxic objects stay in the gut and the young bird dies with the inevitability of a tragic heroine. Unlike the ancient mariner, it has no prospect of salvation.

Thus this majestic creature, like so many species of bird, mammal, reptile, or plant, is a bellwether of the world’s ecological health.

If the seas are polluted, then the whole food chain, and everything – including the high-flying albatross and low-lying man – is affected.

Take Racha Island. On a visit to this sparsely inhabited island south of Phuket, the NRE (Dept of Natural Resources and Environment ) recently checked water quality, at the point where rivulets enter the sea. Three tests found that the levels of coliform bacteria were around 300 times – yes 300 times – the maximum for good quality water.

The island is a microcosm of what has already happened in Phuket. On Racha, and remember that Racha is a newly “developed island”, a recent survey found that a resort was spewing out untreated sewage onto the beach area and thence to the sea. No septic tanks, no nothing. Plastic for sure, and lots more unmentionables. The impact on fragile marine ecosystems can be imagined.”

The albatross gives us a global perspective, but sea-turtles are a key indicator of the health of our own Andaman Sea. Egg poaching has become such a problem that they have to be removed and incubated in safe surroundings. But indestructible trash further affects the turtle’s capacity to dig nests and lay its eggs, while resort encroachment and consequent pollution has meant extensive loss of breeding grounds.

Almost every week, we hear of dead turtles strangled by nylon nets, rendered flipper-less by propeller blades, or laid low by guts full of – you guessed it – indigestible plastic.

The problem is most acute with the leatherback, the largest and rarest of turtles. This majestic, 500 kilogram creature, has been, like the albatross, patrolling these seas for hundreds of millions of years.

For aeons, the long open beaches of north east Phuket and Phang-Nga have been a sanctuary to which leatherbacks have returned to breed. Fewer and fewer now return. In the blink of an eye, the leatherback’s numbers worldwide are estimated to have dropped to 2,300.

And plastic is one of the main villains of the piece. Leatherbacks feed mainly on jellyfish, easily confused with a submerged plastic bag. A bellyful of this rubbish is just as lethal to a massive turtle as it is to a defenseless albatross chick.

On Nai Harn Beach, I have encountered used syringes and needles, plastic lighters, flip-flops, tar-laden plastic engine parts, as well as the ubiquitous bags, water bottles and cigarette butts. All more-or-less indestructible, all with the potential to give off toxins such as DEHP or BPA.

The problem is not just the “Pacific Garbage Patch”, a mass of granulated plastic the size of Texas, or even the fluorescent lighters of Mid-Way Atoll, it is right here. And right now, action at all levels from classroom to cabinet is urgently needed. We may, like the Mariner, be sadder, but are we becoming any the wiser?