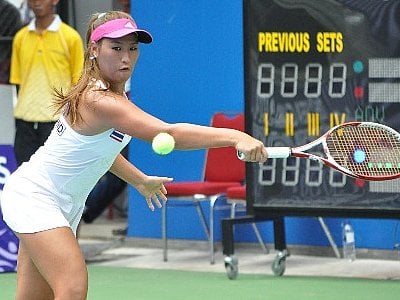 Sema, ranked at 136 in the world, fought back in the quarter-final after losing the first set to the sixth-seeded, but it was Noppowan who prevailed taking the third set and the match 6-4, 2-6, 6-1.

Noppawan raced into to a 3-0 lead before the Sema called for a time-out to treat a back injury. The Japanese returned from the break to level the match at four-all, but the Thai number three seed held her nerve and serve to break Sema and take the set.

“I was playing well at the beginning then I lost my momentum a bit after the timeout. However I stuck to my game plan by hitting to her forehand and it worked,’ said Noppowan.

The Japanese dug deep into her repertoire of shots and serves to keep the Thai off balance and level the match with the second set. But Noppawan’s aggressive baseline game ground Sema down, who lost the last six games and the match.

“I went for my shots even though she was quite solid. I was hitting the ball incredibly. I hit a lot of winners in the third set,’ said Noppawan, who next takes on number four seed Reka-Luca Jani of Hungary, who struggled to defeat Nikola Hofmanova of Austria 7-5, 6-3.

Noppowan, at 20 years old, has encountered the Hungarian previously and commented in a positive nature regarding their upcoming semi-final clash.

“We have played just once before, when we were juniors many years ago, and I won that. She is quite persistent and has a variety of shots. But I’m quite confident with my game now and I hope to keep up with this form,’ said Noppawan.

The other semi-final will be contested is between Dinah Pfizenmaier of Germany and the number eight seed Yuliya Beygelzimer of Ukraine.

The women’s final will start tomorrow morning at 10am.

Eerie silence cloaks the Phuket death of a Swedish tourist