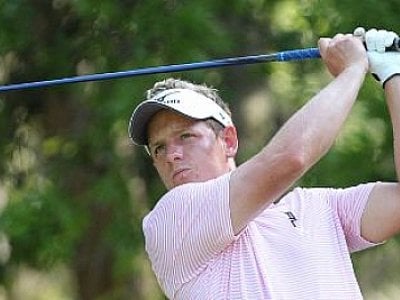 PHUKET: The PGA tour this week hit the Innisbrook Resort in Florida. Rory McIlroy isn’t playing for the next few weeks meaning golf’s world number one spot was up for grabs.

That brings us to former number one Luke Donald, whose golf swing now looks as if it’s in slow motion and he has clearly worked out it’s not all about distance off the tee – the game is about who gets the ball into the hole with the least number of shots. His deadly short game from 100 yards that he uses to full effect week after week has made him the most consistent player in the world for the last few years.

Rounds of 67,68,70,66 earned him a playoff with Robert Garrigus, Jim Furyk and San-moon Bae at Innisbrook. Donald used old school tactics, playing his second shot first in the first playoff hole leaving him with a tap-in for birdie.

His opponents hit nice second shots, but were under pressure knowing Donald had a birdie in the bag and one by one they missed their putts giving Donald the victory that also regained him that number one in the world spot. The Masters is coming up and the form he’s in, an English victory could be on the cards.

The European tour was in Spain this week at the home of ‘the mechanic’ Miguel Angel Jimenez. Doesn’t his name just role off your tongue.

Andalucía have sponsored him for a long as I can remember, but don’t be fooled by this stalwart of the European Tour notable for puffing on his big cigars when playing. He’s another former caddy who turned pro after watching the likes Seve Ballesteros, Sandy Lyle and Sam Torrance in 1979.

He’s played in four Ryder Cups and has won 19 tournaments to date on the European tour and has become one of the great characters on tour. Jiminez is also looking for another crack at playing in the Ryder Cup later this year.

He got himself into the mix for the last round, and the tournament looked like heading for a massive playoff. However, Julien Quesne from France had other ideas. Incidentally the Frenchman didn’t take up golf until he was 17 years old and improved so rapidly that he turned pro within six years. He finished with a last round 64 for a total of 17 under par, two shots clear and his first victory on the European tour. The win shoots him up the world ranking from 322 to 183. It will be interesting to see how he improves from here.

Local Phuket news: Lindsay Renolds picked up his second check of the year after he finished 48th in the Handa Faldo in Cambodian, I’m sure each week is a massive learning curve playing full time tour. Lindsay, take a leaf out of Donald’s book and I am sure you will be contending in future events. We’re all rooting for you.