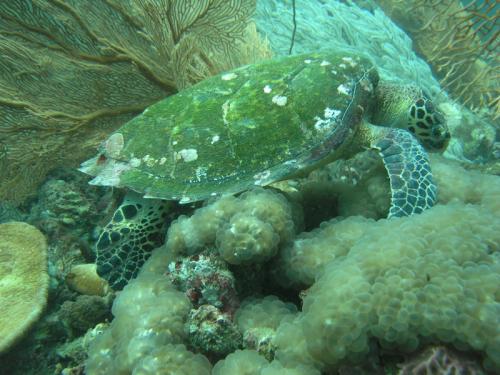 PHUKET: A call by experts to restrict the number of tourists diving at sites off Phi Phi Island to reduce the stress to coral reefs went unheeded, as marine national parks along the Andaman coast ready to open for high season on October 15.

However, a top official at the Phi Phi national park has assured that efforts are ongoing to protect and rejuvenate sections of the park that were devastated by severe coral bleaching in 2010.

“Bleaching has affected up to 70 per cent of the coral reefs around Hat Noppharat Thara-Mu Ko Phi Phi National Park. Of the affected corals, 47.52 per cent have died,” Songtam Suksawang, who heads the National Parks and Protected Area Innovation Institute, told an academic seminar earlier this year (story here).

However, Boonnam Chuyradom, the assistant park chief at Phi Phi Island, yesterday told the Phuket Gazette that his office had received no order to restrict the number of divers at any operational dive sites in the park.

“We have yet to receive any order from the DNP [Department of National Parks, Wildlife and Plant Conservation] to limit the number of divers,” Mr Boonnam said.

“Regardless, the condition of the coral reefs around Phi Phi Island is fine. Most tourists who visit Phi Phi enjoy beach activities, and do not put any additional stress on the reef systems,” he said.

“Only a few reef areas around Phi Phi have suffered any damage. Nonetheless, we always keep an eye on the general conditions and take steps to make sure the corals are recovering,” he said.

However, other areas where the extent of coral bleaching is concerning have been closed to commercial diving, Mr Boonnam confirmed.

“We contacted tour companies and fishermen, and held campaigns to inform tourists not to enter the areas because we don’t want anything to disturb the recovery rate of the reef,” Mr Boonnam assured.

Many marine national parks did close temporarily in May, during the strong southwest monsoon season, so that corals could recover, he added.

“However, these parks will be open for the high season in October,” he said.