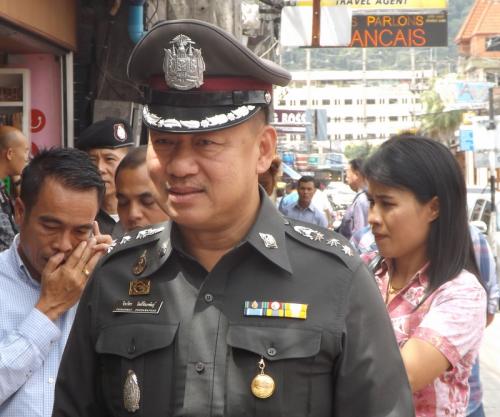 PHUKET: Phuket Governor Maitri Inthusut proposed an increase to the number of tuk-tuks legally operating in Phuket after he took a walking tour of Patong today.

The number of tuk-tuks allowed to operate on Phuket was capped at 1,200 about 10 years ago. However, there are many illegal tuk-tuks operating on the island, which has caused Sakol Srisompoch to lead a group of legal tuk-tuk drivers to lodge three complaints concerning the issue (story here).

“We do not have enough money to pay the monthly installments on our tuk-tuks and to cover living costs. Our incomes have fallen because many illegal taxis [tuk-tuks] are stealing work from us,” said Mr Sakol in late June.

By inspecting the tuk-tuk drivers along Rat Uthit 200 Pee Road and the shopkeepers who regularly come into contact with them, Gov Maitri proposed that a study be undertaken to set up a new system that will better allocate the services of tuk-tuk drivers around the island.

“During the low season, the number of tourists in any given area of the island, be it in Phuket Town or Patong, can be estimated, and drivers and their vehicles could be allocated to those areas appropriately, which would be advantageous to both the drivers and the tourists,” said Gov Maitri.

The general response from shop owners to Gov Maitri’s proposal of increasing the number of tuk-tuks and better distributing their services around the island was a welcome one.

Until the illegal tuk-tuks become legal, however, officials have vowed to take action.

“We set up check-points around Patong every day,” Col Chiraphat explained.

Legal Patong tuk-tuk driver Sutin Sukkeaw believes that there are enough tourists for all the tuk-tuk drivers operating in Phuket to make a living, and welcomed the idea of the government paving the way for legalization.

“There would be no issue in increasing the number of tuk-tuks. Already illegal tuk-tuk drivers have their own queuing stations, and we have ours – I have never witnessed any passengers being stolen by an illegal tuk-tuk,” Mr Sutin said.

“Many tuk-tuk drivers are protesting because they are afraid that an increase in the number of tuk-tuks operating on the island will affect their income. However, I don’t see this as an issue, because there are so many tourist visiting Phuket,” he said.

Jaturong Kaewkasi of the Phuket Land Transport Office (PLTO) backed Gov Maitri’s call for a study of the need for tuk-tuk services before increasing the current ceiling.

“The need for more tuk-tuks by consumers will have to be the key motivation for increasing the number drivers allowed to operate on the island,” Mr Jaturong said.

“In the past, there were a lot of tuk-tuks operating in Phuket, but only a few tourists arriving during the low season. We don’t want the drivers to have conflicts with each other and force us to discuss this issue again,” he explained.

After concluding his investigation along Rat Uthit Pee 200 Road, Gov Maitri said he would appoint relative officers to the case and have the issue resolved as soon as possible.

Nigerian tourist attacked and robbed of his rented motorbike