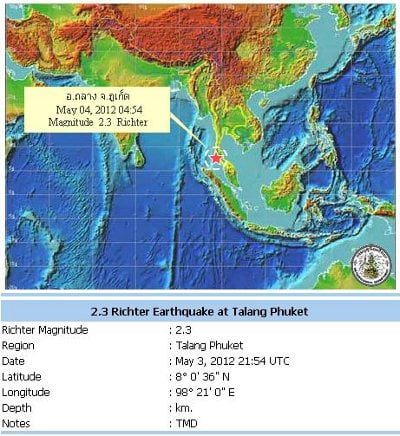 PHUKET: A 2.3 Richter aftershock centered in Phuket’s Thalang District struck at 4:54am today, waking some residents with a loud bang, while others reported feeling nothing at all of the tremors.

“The epicenter of the aftershock was at Latitude 8º 00′ 36″ N, Longitude 98º 21′ 00″ E. It was almost at the same location as the 4.3 quake on April 16,” said Sophon Chaira, of the Thai Meteorological Department (TMD) Seismology Center in Bangkok.

“The small earthquake this morning was just an aftershock from the earthquake on April 16. Our center recorded the aftershock at 4:54am, registering 2.3 on the Richter scale,” he added.

The seismometer at the earthquake monitoring center set up in Srisoonthorn, which was the epicenter of the April 16 quake, also recorded the aftershock.

“Our canter also detected the aftershock at 4:54am. However, although our machine detected, no one here could feel the tremors,” said Kanokthip Ganganon, public relations officer at Srisoonthorn Municipality.

“Also, we have not received any phone calls or reports from Srisoonthorn residents about the quake or any reports of damage to houses,” she said.

“But an officer from Thalang Police Station came here this morning and he said he felt the quake at the police station while he was on duty,” Ms Kanokthip added.

One resident in Baan Manik, in Srisoonthorn subdistrict, told the Phuket Gazette that the earthquake woke her family from their sleep.

“I was woken up by a loud bang. I wasn’t sure whether it was a lighting strike or an earthquake, but then I felt the tremors. That confirmed what I heard was from an earthquake,” she said.

“My friend who lives in Pa Khlok also heard the same bang and felt the same quake at the same time,” she added.

Mr Sophon of the TMD Seismology Center in Bangkok explained to the Gazette that it was not unusual to hear a loud bang during an earthquake or an aftershock. “It’s the sound of the parts of the Earth’s crust hitting against each other,” he said.

No lifeguards on beaches as Phuket enters surf danger season