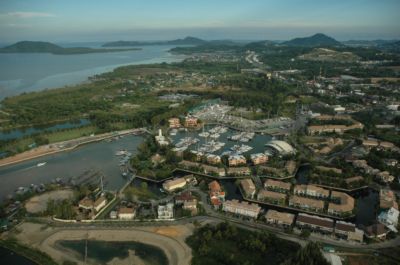 PHUKET: Asked by a number of readers to check on a report that there is now a ban on further marina and pier development projects in Phuket, the Gazette has today obtained confirmations that such is not the case.

According to both the Department of Natural Resources and Environment (DNRE) and the Office of the Governor of Phuket, with whom Gazette reporters spoke this afternoon, there was, and is, no intent to ban proposed new marina construction in the island province.

The confirmations are much at odds with a report on a local blog last week that caused alarm among Phuket’s property developers, the tourism industry, and other businesses on the island.

The report claimed that Phuket Governor Wichai Phraisa-ngob had ordered a “ban” on construction of any more marinas here. It went on to say that the ban had been “based on the broken promises of several big-name, high-profile developments that have sprung up along the east coast in the past few years.”

But a spokesman at Provincial Hall says that Governor Wichai had simply agreed with a DNRE recommendation that provincial authorities set a new policy to carefully examine marina and other coastal development proposals in order to properly assess their impact on the environment before giving them the go-ahead.

“The new policy only places tougher restrictions on such projects and prioritizes the development of existing marinas and piers,” he said.

A Life Remembered”¦ A tribute to Keith Floyd