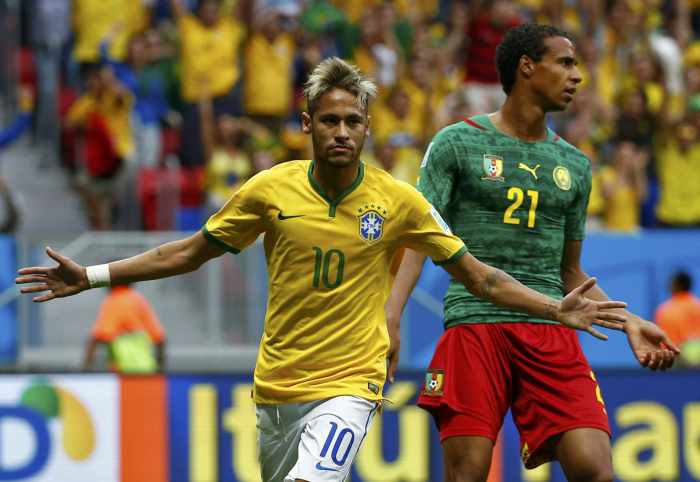 PHUKET: Brazil’s poster-boy striker Neymar fulfilled a nation’s expectations to score twice in a 4-1 destruction of Cameroon on Monday while the Netherlands again showed their potential to win the World Cup with a third straight win.

The 22-year-old Neymar, his team’s box-office attraction and main hope for goals, again rose to the occasion with two precise low shots in the first half either side of Cameroon’s goal.

His first, fittingly, was the 100th of a high-scoring tournament in what was Brazil’s 100th World Cup game. It also made Neymar top scorer with four so far.

In a game where Brazil rediscovered the swagger that won them the Confederations Cup last year, Fred added a third and Fernandinho a fourth in the second half. That gave the hosts top spot in Group A and the reward of facing Chile in Belo Horizonte on Saturday when the exciting knockout rounds start.

“The team has got back that spirit that we used to have,” a delighted Fernandinho said.

The result sparked delirium in the Brasilia national stadium and around the country, where fireworks flew and parties began.

In the other Group A game, impressive Mexico beat Croatia 3-1 to win second spot and a last-16 game against the Dutch on Sunday. Rafael Marquez, Andres Guardado and Javier Hernandez scored the Mexican goals in the second half.

Earlier, the Netherlands continued their outstanding start with a third win, 2-0 against Chile, showing power and pace.

The 2010 runners-up have lost three World Cup finals, earning them a reputation as perennial nearly-men, but may have a chance to rectify that in Brazil with one of the strongest-looking sides. They have scored 10 times in the group phase.

Against Chile, who qualified for the last 16 as runners-up in Group B, they left it relatively late.

Substitute Leroy Fer scored with his first touch of the tournament, thumping home a close-range header in the 77th minute. Then another replacement, Memphis Depay, made it two in stoppage time after Arjen Robben broke down the left.

“This is not where we want to stop,” said Robben.

In the other Group B game, a meaningless encounter between homeward-bound Spain and Australia, the Europeans at least salvaged some deeply-hurt pride with a 3-0 win thanks to goals from David Villa, Fernando Torres and Juan Mata.

“We played with dignity,” said Spanish coach Vicente Del Bosque who is considering his future after the end of the reigning champions’ six-year domination of world football.

As ever, there was controversy off the pitch.

Also, FIFA has been coming under fire from various smaller teams over locations and schedules of matches.

But Germany defended the global football body on Monday in response to criticism from U.S. coach Juergen Klinsmann that the Europeans had more time to recover, and were travelling less, before their Group G showdown on Thursday.

“The match schedule was known to everyone before the draw and no one complained at the time,” said assistant coach Hansi Flick in response to Klinsmann’s accusations of favouritism.

Beyond football matters, Brazilians have been going out of their way to help the estimated 600,000 foreign visitors.

Cab drivers are using smartphones to understand foreign languages, street vendors are grilling meat on their doorsteps to satisfy spectators left hungry by long queues at stadiums, and some locals are ferrying fans by bike to beat the traffic jams.

With political protests only sporadic, and anxiety over infrastructure subsiding, the tournament has come alive in the way fans around the world expected it would in a football-mad nation also famous for its beaches, samba and caipirinhas.

ALL GROUPS COMING TO HEAD

On Tuesday, Groups C and D come to a head with plenty still at stake to hold fans’ interest round the globe.

Already through on a maximum six points, giantkillers Costa Rica need only a draw against eliminated England to guarantee top spot in Group D and will have no fear of ‘The Three Lions’ after beating two other former champions Italy and Uruguay.

Italy will join the Central Americans in the knockout phase if they can draw with or beat Uruguay on Tuesday. Confirmation of striker Luis Suarez’s fitness gives his team hope they can gun down Italy like they did England and grab the second berth.

For England, it is only about pride.

“The mother of football cannot leave without points,” Costa Rica coach Jorge Luis Pinto said, wary of a backlash after a first English failure to reach the second round since 1958.

Later on Tuesday, high-flying Colombia need only a draw against Japan to ensure top spot in Group C.

Second-placed Ivory Coast hope to beat Greece to guarantee the other berth in the World Cup’s second stage. Though only on one point, Greece and Japan are not dead and could squeeze through with a win in a group with multiple permutations.