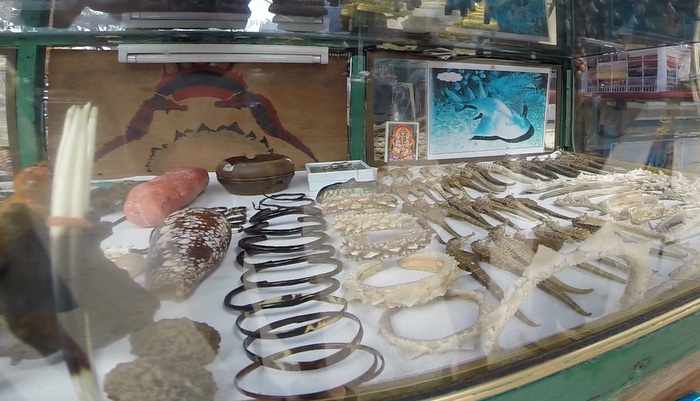 PHUKET: A vendor selling several pieces of illegal black coral jewellery in a Sea Gypsy village in Phuket was given a stern warning and a lesson on conservation Saturday afternoon.

“We got a tip-off about the vendor near Rawai Pier, and asked Chalong Police officers to check it out,” Tanet Munnoy, chief of the Department of Marine and Coastal Resources (DMCR) Region 5 office, told the Phuket Gazette today.

The vendor had a variety of marine animal products for sale, including black coral jewellery, dried seahorses and angel shark bracelets.

“There were more than 20 [black coral] items on sale. However, only seven of them were actually made of black coral. The rest were plastic,” Mr Tanet said.

“Officers confiscated the black coral items, and sent them to our office.”

Several other marine species products were for sale, including seahorses. Photo: Emily Ridout

Officers detected the fake items by holding them above a flame.

“You can tell if it’s plastic or part of an animal based on the smell,” Mr Tanet said.

The illegal items were valued at about 2,000 baht.

Mr Tanet explained that education is the key to preventing locals from selling illegal animal products, not fines and jail time.

“Instead of arresting the vendor, officers talked about the importance of conservation and why locals need to help preserve these animals instead of selling their remains,” Mr Tanet said.

“Even if we keep arresting small vendors, they will be back sooner or later.

“Nonetheless, if police catch a person dealing in large numbers of these products, we will need to make an arrest.”