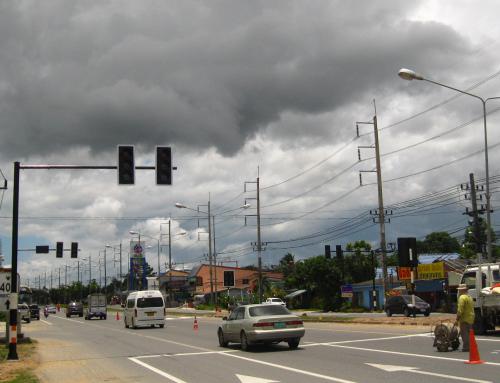 PHUKET: One of the deadliest stretches of Thepkrasattri Road got new traffic lights on Thursday. Or rather, got its old ones up and operating again.

The 2.9m baht lights, located at the Baan Khaolarn intersection between the PTT station in Sri Soonthorn and Tesco Lotus in Thalang, have been installed to increase safety in the area, said Director of Phuket Highways Samak Luedwonghad.

“There have been five accidents on this stretch in the last three months, two of which had fatalities,” he said late last month.

He was not including the death on Thursday of a woman who was crossing the street when she was struck by a hit-and-run Chinese tour bus, (story here) nor the three deaths over the past Christmas and New Year period reported by the Phuket Gazette.

The 5.5km of road between the circle at Heroine’s Monument and the traffic light at Tesco Lotus Thalang has four u-turns but nothing to slow the speed of vehicles hurrying along Phuket’s main south-north route towards the airport, Sarasin Bridge and other provinces.

There used to be a traffic light at the Baan Khaolarn intersection, but it was removed some years ago because authorities felt traffic volume wasn’t enough to warrant it, Mr Samak said.

However, the number of cars and motorbikes has increased and the area has developed and gotten more crowded, he said.

“Putting the traffic lights here will reduce the number of accidents on the road. It will help reduce the speed of traffic, make a safe place to u-turn and increase the safety of nearby u-turns as well,” said Thalang police Deputy Traffic inspector Sarayuth Meeboon.

Special Report: Is my neighbor a contract killer?