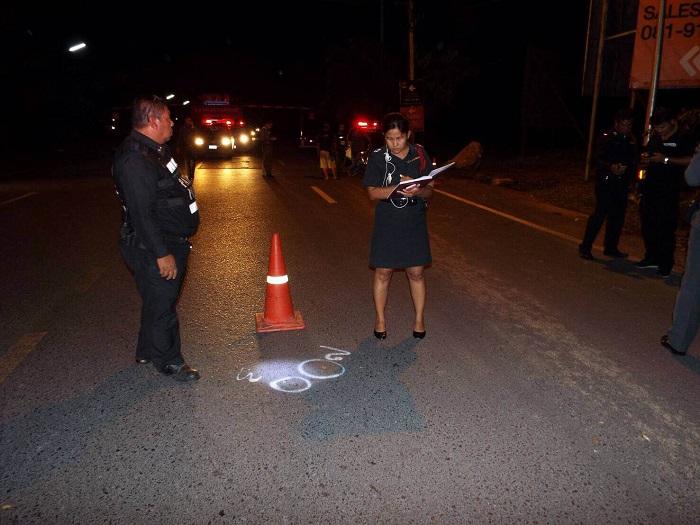 The manhunt began after Thanapol Choosawat was shot dead by unknown assailants, allegedly over a debt of 500 baht (approx USD 14.00) (story here).

The two suspects, named by police as Padermchai Chaichana, 35, and Kan Phothalang, 22, both walked into the Phuket City Police Station and surrendered at 4pm yesterday. Based on the arrest warrants, they were charged with premeditated murder, attempted murder, illegal possession of a firearm, and carrying a firearm in public without permission.

Investigating officer Lt Col Naruibadin Pangleesen said Mr Kan, owner of a tattoo shop, claimed that a friend of Mr Thanapol, known only as ‘Lip’, had gone to get a tattoo at his shop and had agreed to pay 500 baht for the service.

“Mr Kan claims that when he had nearly finished the tattoo, Mr Lip told him it was too painful and asked him to stop, then left the shop without paying,” said Col Naruibadin.

Mr Lip then reportedly telephoned Mr Kan to tell him that if he wanted the 500 baht he should meet him (Lip) near the British International School (BISP) to settle the matter. So Mr Kan went with his ‘brother’, Mr Padermchai, to the meeting.

The two suspects went on to explain that they went to meet Mr Lip as arranged but could not come to an agreement. They claimed that Mr Thanapol and his friend Yuranan Jitjaroen drove toward the car out of the darkness and shot into the vehicle, injuring one of them.

They claim in their statements that Mr Padermchai knocked the gun out of Mr Thanapol’s hands and, in defense, took out his own gun – at which point Mr Thanapol tried to grab the gun and accidentally shot himself, said Col Naruebadin.

Col Naruebadin told the Gazette that as both sides told differing accounts of the incident, more evidence was required to get to the bottom of the case.

Mr Kan and Mr Padermchai reportedly plan to file a complaint against Mr Thanapol and his accomplice.