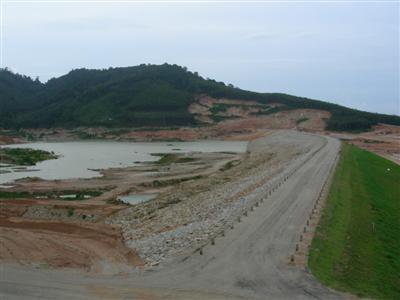 THALANG: Work on Phuket’s second major reservoir at Bang Neaw Dum in Srisoothorn is almost complete, with one million cubic meters of water already being held behind the dam.

Supinyo Hoonpadungrat, head of the Phuket Provincial Irrigation Office, said that work on the earthen dam, spillway and associated waterworks is now “about 97% complete”.

Mr Supinyo expects about 3.5 million cubic meters to be in storage in the reservoir by year’s end, just under half of its 7.2-million-cubic-meter capacity.

Based on average rainfall, the reservoir should be full by about November next year, he said.

Like the Bang Wad reservoir in Kathu, the Bang Neaw Dum reservoir will be encircled by a roadway. The surrounding land will be developed as a recreational area, with the Srisoonthorn Tambon Administration Organization (OrBorTor) expected to fund the project, he said.

The water will flow to a Phuket Provincial Water Supply (PPWS) treatment plant, from which it will be piped throughout various parts of Thalang, he said.

It will be the first PPWS supply system in Thalang, which until now has had to depend mostly on supplies from tin mine and groundwater reserves that tend to run out in the dry season.

Another water project in the works is a small Kaem Ling (monkey’s cheeks) reservoir recently proposed for Klong Koke Tanode in Cherng Talay, the surrounding area of which floods during the monsoon season.

The Kaem Ling concept of His Majesty King Bhumibol Adulyadej’s is meant to reduce flooding and extend water supplies longer into the dry season.

The potential impacts of the project are now being assessed under a study funded by the Cherng Talay Tambon Administration Organization.

As for the island’s third major reservoir, a 5.7-million-cubic-meter basin at Klong Krata in Chalong, the Irrigation Department is still awaiting approval from the Forestry Department to use about 30 rai of land.

The Irrigation Department will request funding for the project under the next fiscal budget, Mr Supinyo said.

Governor Niran to be transferred to Bangkok