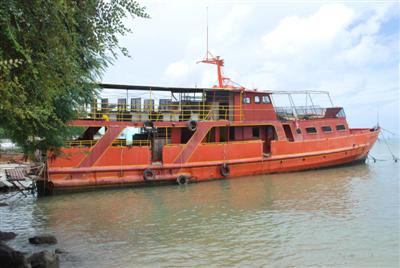 PHUKET CITY: Local divers will welcome the news that three old ships are scheduled to be sunk off Racha Yai Island to create a new artificial reef.

The project, organized by the Department of Marine and Coastal Resources (DMRC) regional office in Phuket and a host of other local government agencies, is scheduled to start next month.

It is hoped the project will alleviate stress on natural coral reefs in the area.

Approximately 15 tour operators ferry over 200 divers daily to sites off Koh Racha Yai during the high season according to the DMRC.

Two iron-hulled ships, 18 and 28 meters long, were donated for the project.

The larger of the two was donated by the Thai Hotels Association.

The third ship, made of wood, was donated by the Phuket Provincial Fisheries Association.

The project also enjoys financial support from The Racha hotel.

Paitoon Panchaiyapum, director of the DMRC office in Phuket, told the Gazette that the project has been four years in the making.

Unfortunately, unless an additional 200,000 baht can be raised soon it is unlikely all three vessels will be sunk by November, he said.

This latest project is the fourth artificial reef put in place around Koh Racha Yai by the DMCR.

The office is also awaiting 22 million baht in government funding to greatly expand an existing artificial reef in the area, from an existing 300 concrete modules to 3000.