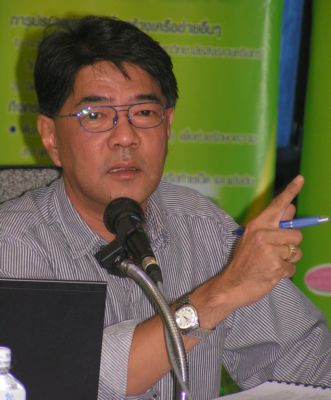 PHUKET CITY: Proposed plans for a new incinerator on Phuket were put on hold this week despite Phuket City Mayor Somjai Suwannasuppana insisting that the island’s garbage problem is too big to wait.

The proposal came after large quantities of fish were killed in waters polluted by leaked toxins from the island’s sole incinerator in Saphan Hin.

The incinerator, which can burn up to 250 tonnes of garbage a day, cannot cope with Phuket’s daily production of 520 tonnes.

Waste that is not burned is piled behind the incinerator in landfills next to water retention ponds. After heavy rain on June 22, water from the piles of garbage leaked into nearby mangrove forests and into Khlong Koh Kui and Khlong Koh Phee.

K. Kasem suggested that the incinerator be upgraded and that Phuket residents separate garbage into different types.

After his return to Bangkok he recommended that Jutuporn Buruspat, deputy director-general of the Department of Environmental Quality Promotion, meet with Phuket Governor Niran Kalayanamitr.

Discussions were focused on the long-term goal of solving Phuket’s growing garbage troubles.

Participants in the meeting concluded that the first step to easing the situation is to persuade people to separate their garbage into what can and what cannot be recycled. The governor approved a plan to appoint officers from various public sectors – including education and hospitality – to raise awareness about the importance of recycling.

K. Jutuporn on Wednesday morning told reporters at Phuket Provincial Hall that responsibility of Phuket incinerator will be handed over to the Pollution Control Department.

He added that the solution to the island’s waste woes lies in sending less garbage to the incinerator and that the whole province must get behind this plan of action.

Eight projects proposed for Phuket by Prime Minister General Surayud Chulanont were discussed, one of which is a new incinerator for the island.

At the meeting, Mingquan Wichaya Rangsaridh, Pollution Control Department deputy director-general, said that Phuket must improve its garbage management program and show details of initiatives, such as processing garbage into compost.

However, he added that an investigation team must first evaluate how Phuket’s incinerator is being used before a proposal for a new one can be forwarded to the government.

Mayor Somjai said that seven of 19 local administration offices had helped reduce Phuket’s surplus of waste through garbage separation and the recycling of materials for compost, but this had not been enough to make the volume of garbage more manageable.

After the meeting, Dr Kasemsun told reporters that the proposed budget for a new incinerator was on hold until alternative solutions can be looked into. He added that a new incinerator would only provide a short-term solution to the island’s trash management problem.