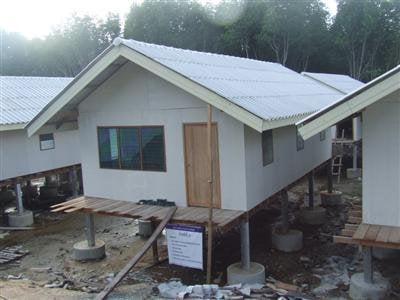 At a meeting at Phuket Provincial Hall last week, Gov Wichai said the new homes would be handed over to the villagers in a ceremony to take place in early November.

The governor thanked the 27 vocational students who helped build the new homes and wire them up with electrical power free of charge.

Gov Wichai described the effort as a ‘win-win’ scenario because the students need practical work experience, while the sea gypsies could not afford to pay professional builders.

“The Hin Look Diow villagers really need technicians to wire up their homes, as the cause of the fire that partially destroyed their village was an electrical short circuit,” Gov Wichai said.

The village comprises stilted homes built of wood and corrugated zinc panels above an inter-tidal zone surrounded by mangrove forest.

Each of the 17 homes has one bedroom, one bathroom, a living room and two light fixtures.

Toasted sandwiches: one night only in Phuket