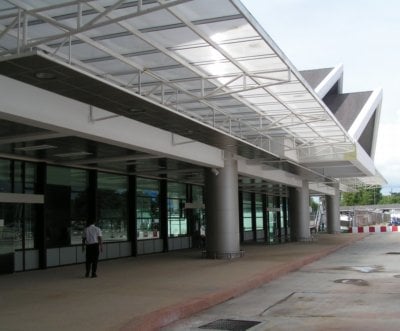 The 120-million-baht expansion started in April 2004 and the building was completed earlier this year, he said.

The ground floor of the new wing features check-in counters for chartered flights, which will be mostly international flights. The second floor features the international departure lounge.

A meeting to discuss how to best prepare for high season was due to be held on June 7 with Phuket Tourist Association representatives, the Senior Executive Vice President for Airport Planning and Development, the airline operators committee, Airport Authority of Thailand (AOT) representatives and German airline LTU, which is expected to bring a large number of charter flights to Phuket.

“We will also talk about the management of passport control with the Phuket Airport Immigration Superintendent,” K. Pornchai said.

However, K. Pornchai said that he is concerned that when several planes land at the same time, Immigration won’t be able to serve all the tourists quickly.

“Even if it’s not very often that tourists face long delays, just a few hours in a year, it can ruin Phuket’s reputation,” he said.

“We will have to add more facilities because initially we prepared for chartered flights that had about 200 passengers, but last year when we were nearly finished with the project, we had big aircraft such as Boeing 747-400s that can carry as many as 600 passengers coming in.

“We now have seven check-in counters but we will add three more to support the international charter flights,” he said.

“We intend to open the new area about mid-October because that’s usually when the chartered flights begin to arrive.

“We will [also] add about 25 more security staff,” he added.