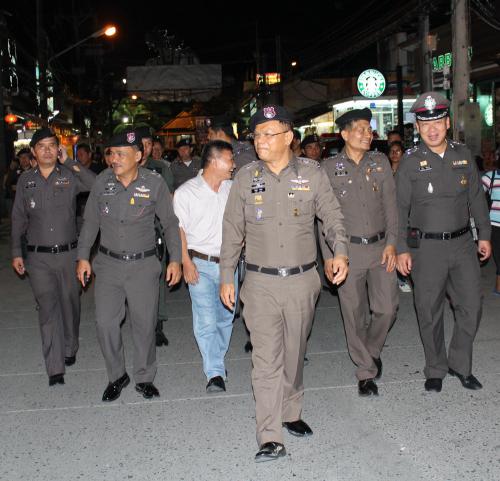 PHUKET: The new Police Region 8 Commander on Sunday demanded that officers in Karon and Patong include beaches in their patrol zones.

“In order for tourists to truly relax and have a good time, they must feel safe, even on the beach,” said Police Region 8 Commander Panya Mamen on his first official visit to Phuket.

“When Karon Police Station was set up in December last year, the plan was to staff it with 103 officers,” said Karon Police Superintendent Weerawat Jantarawichit (story here).

“But we only have 41 officers and five police trainees. Sometimes I have to call in traffic police to help us patrol the area,” Col Weerawat said.

Gen Panya praised Karon for its clean beach and good umbrella management, and acknowledging the officer shortage, promised to ensure that some of the 700 new officers expected to start arriving on the island next month would be posted in Karon (story here).

The general visited Patong next and was escorted down Bangla Road, which garnered international attention after R’n’B celebrity Rihanna tweeted about ping pong shows (story here) and posted images of slow loris on Instagram (story here).

“Everything is fine on Bangla Road, there are no animal touts or ping pong shows operating,” Gen Panya said after his inspection.

At the end of his tour Gen Panya ensured that Phuket would have more police officers, in line with Phuket Provincial Police Commander Ong-art Phiwruangnont’s new slogan: “No mafia, and police everywhere will guarantee a safe holiday on Phuket”.