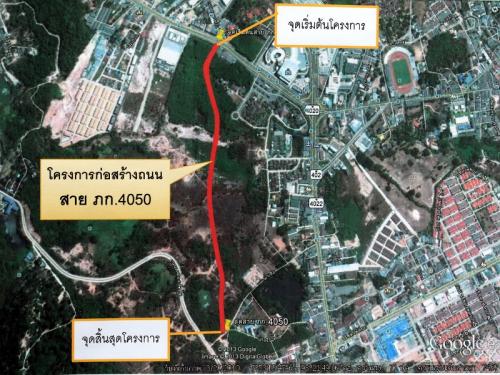 PHUKET: Officials this week inspected the site of a new two-lane detour that will allow travellers between Patong and Chalong to bypass the Darasmuth Intersection in front of Central Festival, relieving congestion.

The detour is in response to traffic jams at the intersection caused by the construction of the Darasmuth underpass (story here), said Phuket Vice Governor Sommai Prijasipa.

One end of the detour will be located half way between Makro and Central Festival on Vichit Songkram Road near the Soi Bang Yai turnoff to Big C.

The other end will be about 300 meters south of the Darasmuth Intersection off Chao Fa West Road near Soi Na Sua.

“The detour will be two lanes and 1.25km long. It should take about 150 days to complete,” said Teeraporn Jirarattanakorn, Director of the Department of Rural Roads Phuket office.

“As soon as they distribute the money, we’ll begin construction,” he said.

Poles are for climbing at Phuket Agricultural Fair