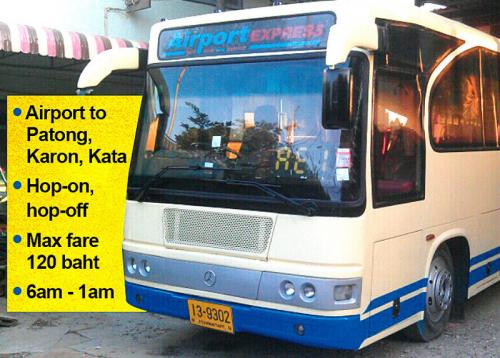 PHUKET: After decades in the planning, a new bus service will launch on the island in March. The new route will travel between Phuket International Airport and the popular tourist beaches of Patong, Karon, and Kata via Tesco Lotus on the bypass road (click here to see map of the new bus route).

For safety reasons, Phuket Land Transportation Office (PLTO) chief Teerayut Prasertpol asked the Phuket Gazette not to name the operator willing to launch the bus route, but he disclosed that the company had signed a seven-year contract with the government to provide the long-awaited service.

The new service will offer “hop on, hop off” bus stops at a maximum cost of 120 baht for the entire route.

“We are not targeting tourists with the new bus service,” Mr Teerayut said. “We are pushing to develop more public transportation options for everyone on the island who cannot afford to keep using taxis and for Phuket residents who often need to travel to the airport.”

“We are planning to install bus stops in Thalang Town, at the Heroines Monument, in Koh Kaew and at the Tesco Lotus shopping mall. There will be only one stop each at Patong, Karon and Kata,” Mr Teerayut explained.

Under the terms of the government concession, the buses must be air conditioned, seat no more than 30 passengers and have room for travellers’ luggage.

“At this stage the buses are set to run every 40 minutes, starting around 6am when the first flight arrives at the airport and ending at around 1am. However, the schedule is flexible. It depends on traveller demand. It is possible the buses may run every 30 minutes. We will see,” Mr Teerayut said.

“We are also considering allowing higher fares to be charged for night buses, but they will not be much more expensive, only about 50 baht more,” he added.

Mr Teerayut stressed that the new bus service will deliver a breakthrough for public transport in Phuket.

“Think about it: If you had 1,000 baht and you were in another province, it could pay for your transport, hotel and food. In Phuket, you need that much for the taxi fare alone.

“But with the new bus service, if you have 100 baht in your pocket, you can now travel in Phuket,” he said.

Critical to getting the company to step up and launch the bus service was gaining investors’ confidence the route will be safe to operate.

“The new route operators have expressed their fears in providing the new service. They asked me what we can do to protect them from being attacked.

“I will be honest in saying that I fear local taxi operators might act as they have done in the past,” Mr Teerayut said.

“However, the situation in Phuket has changed. We cannot take it anymore. People need another option and taxi operators must accept it.”

To allay fears of violent reprisals by taxi driver “co-operatives” on the island, the PLTO had to call in support from nearly every major government office in Phuket.

“The work cannot be done by us alone. Therefore, the PLTO is working with Phuket Governor Maitri Inthusut, police officers and local administration organizations. We have even talked to local taxi operators to make this route happen,” Mr Teerayut explained.

“Phuket needs to prove that we can provide public transportation for local people and tourists,” he added.

Gaining investors’ confidence that they will recoup their initial investment also took time, about three years.

“I believe the operators will recover their initial investment in about 18 months with this new route – and they believe so too, that is why they applied to provide the service,” Mr Teerayut explained.

“As I said, we are not targeting tourists. I believe people who prefer the convenience of using taxis will still use them, and they will be willing to pay more for the extra convenience. Public transportation is just another option to support the island’s tourism industry.

“At least tourists will not think that public transport on the island is just one big scam and that they do not even have a choice.

“This time the situation is different. People are more aware of the need to create a good reputation for Phuket. With the new route, we are sure that the kinds of problems we have had in the past will not happen again.

“I personally believe that everyone – even airport limousine drivers and taxi operators in Patong and Kata-Karon – all want to see Phuket’s reputation shine,” Mr Teerayut said.

This story was originally published as the page one lead story in the hard-copy issue of the Phuket Gazette that hit the newsstands on Friday.