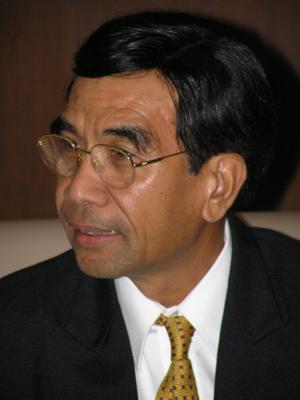 PHUKET TOWN: Just one day before officially taking up his new post as Phuket Governor CEO, Udomsak Usawarangkura told reporters today that tourism development would remain a top priority under his leadership. “I will continue to emphasize tourism development for Phuket, as this is the island’s most important industry,” K. Udomsak said following a dinner with local officials at the Phuket Governor’s Mansion. “Foreigners who come to visit Phuket enjoy its natural resources, food, hospitality and the local people. We will continue to develop in all of these areas,” he said. K. Udomsak explained that although some 4 million tourists already visit the island annually, he hopes to increase this figure and further develop the province into a regional tourism hub. He added that nearby provinces like Krabi and Phang-nga would benefit as a result. “Other government policies, such as increasing security and ending corruption, will also be implemented. These will make Phuket more attractive to tourists,” he added. Regarding the land investigation, K. Udomsak said that it must be conducted in strict accordance with the law and that as CEO Governor he would follow all regulations, even if it meant having to sign papers authorizing the revocation of land title deeds.