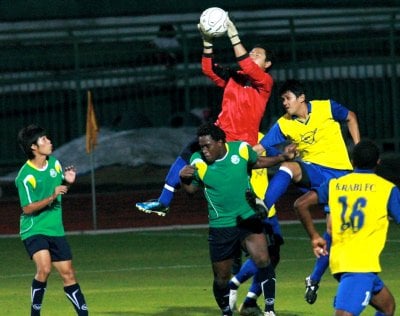 PHUKET: FC Phuket’s preparations for the 2011 season received a boost over the weekend, when they proved too strong for their provincial neighbors in the ‘Andaman Four-way Fight’ mini-tournament at Surakul Stadium.

The Andaman Four-way Fight was organized to help raise money for FC Phuket’s player .Camara Ahmed, who suffered a heart attack during a match in late October.

The tournament also provided new Phuket manager Surachi Jirasirichot his first chance to run the rule over a raft of new signings for the club.

The skillful South American looks set to become a fan favorite once the Thai League Division 1 season gets underway next month.

Another new recruit, Wirajroj Chanteng, recently signed from Pattaya United, was Phuket’s other scorer on the night.

The home side, also known as ‘Hulks’ should have beaten Krabi by more than two goals in what proved a niggly encounter, which at times seemed anything but ‘friendly’ match.

In Sunday’s decider, Phuket were up against Phang Nga FC, who defeated Surat Thani 2-0 on Friday to reach the final.

Phuket again had too much class for their opponents, wrapping up a 2-0 win thanks to goals from new boys Watcharapong Channgam and Seksit Srisai.

Money raised from the mini-tournament will go into the Camara Ahmed benefit fund, which is now at the 100,000 baht mark.

The money is to be presented to Camara’s brothers at half-time in tomorrow’s game against Muang Thong United, who will have Thai national team captain Nattapron Phanrit in their line-up.

Before kickoff at 6pm, Phuket will introduce the all their new signings to supporters. FC Phuket secretary Sorranan Sanae also confirmed to the Phuket Gazette that club’s management hopes to sign two new defenders before the start of the season.

FC Phuket’s first league game in Thai League Division 1 will be an away trip to face Suphanburi FC on Sunday, February 13. The full fixture list for the season is expected later this week.

A Phuket call to join The Bay Regatta