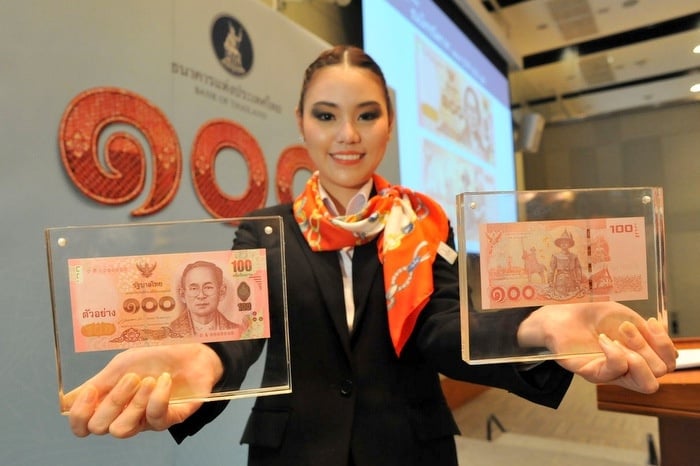 PHUKET: New 100-baht banknotes are available at commercial banks in Phuket and elsewhere throughout the country starting today, staff at the Bank of Thailand confirmed to the Phuket Gazette this morning.

“The design is to honor King Taksin ‘The Great’ for his contributions to the country,” Mr Paiboon said.

“It has several new and enhanced security features to facilitate authentication by banknote sorting machines and the general public, including visually impaired persons.”

Among the security features on the new banknote are:

1. Watermark: HM the King’s portrait watermark and the translucent watermark of the Thai numerals for “100” can be clearly observed when viewing the note against the light.

2. Latent Image: The latent image of hidden numeral “100” inside the copper-colored ornament can be seen when viewed from the correct angle.

4. Hologram Foil Stripe: Reflective holographic foil on the right-hand side of the note contains the Royal Emblem with Arabic numerals “100” in the center, switching to Thai numerals for “100” when tilting the note.

5. Windowed Color-shifting Security Thread: The special security thread partially embedded on the reverse side changes from magenta to green upon tilting. The text “100 [baht in Thai]” and “100 BAHT” can be read from both sides.

6. Tactile Marks: Seven embossed horizontal lines lead to the denomination numerals which are three tactile marks in the shape of flowers, representing the letter “H”, symbolizing “Hundred”, and can be identified by touch.