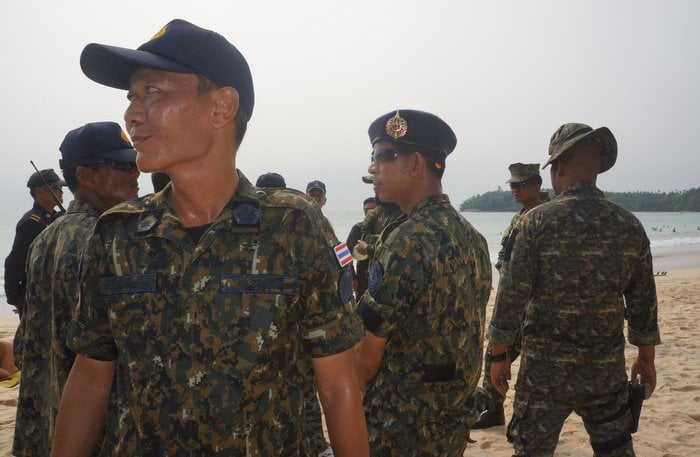 PHUKET: A ‘misunderstanding’ about vendors on Kata Beach garnered a visit from Navy personnel and Damrongtham Center Chief Prapan Kanprasang on Thursday.

“After we talked to Kata Beach vendors and Karon Municipality officials, we believe that the complaint was a misunderstanding,” said Capt Boworn Promkeawngam of the Royal Thai Navy’s Phuket-based Third Area Internal Security Operations Command (ISOC).

“The right to rent out umbrellas and sell drinks on the beach goes to the former vendors who used to do business there before the beach cleanup campaign. We do not allow new vendors.”

No arrests were made during the inspection, which was used mainly as an opportunity for officers to question those involved.

“I have ordered Karon Municipality officials to call all the vendors together and re-explain the rules so that they understand and follow them,” Capt Boworn stated. “And as always, if current vendors ignore the rules and sell beyond their zone, their permission to sell will be revoked.”

Capt Boworn also took the opportunity to reinforce the ban on drinking alcohol and smoking on the beach, stating that it is up to local officials to put up signs and enforce the rules.

“However, we mostly focus on the beach vendors, not the tourists. We understand that it’s not wise to harass tourists,” said Capt Boworn.

“I suggest that if officials see tourists breaking the rules, they should strongly suggest that they stop what they are doing.”

Capt Boworn noted that if the municipality failed to do their job, then navy officers would do it for them.

“On behalf of Phuket Provincial officials, the Royal Thai Navy and ISOC, I would like to urge everyone to protect the beaches. Please keep the beaches clean and follow the rules so that we can have beautiful beaches for generations to come.”