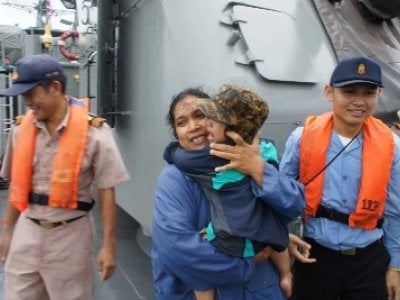 PHUKET: The Royal Thai Navy Third Area Command yesterday rescued Thai and foreign holidaymakers, including many bound for Phuket, who were stranded on the Similan and Surin islands due to the heavy seas.

HTMS Bangpakong, under the command of Joint Rear Admiral Rangsarit Sattayanukul, at 2pm sailed to the Similans from its port at the navy base in Thap Lamu, Phang Nga.

A total of 133 tourists were safely returned to the mainland after being stranded on the remote islands since Saturday, when an active low pressure cell settle in the region bringing unprecedented and heavy, wind-driven seas.

The tourists came ashore at the base in Thap Lamu at 8:30pm.

All 73 were safely returned to shore at Kuraburi Pier in Phang Nga at 10pm.

Tourists to the popular marine national parks typically get there by speedboat from Kuraburi and other ports in Phang Nga, but high seas made it too dangerous for them to continue operating.

The bad weather could spell an early end to the dive tourism industry in the parks, which close annually during the monsoon season from May through October.

Meanwhile, the Southern Meteorological Center (West Coast) at Phuket International Airport has issued another weather advisory warning the public of heavy rains and high seas from the low pressure system.

The advisory, issued at 11am, warns of possible “very heavy” rains along Thailand’s entire Andaman Sea coastline, with the risk of flooding and landslides in high-risk areas in all six Andaman Coast provinces: Ranong, Phang Nga, Phuket, Krabi, Trang and Satun.

Wind-driven waves up to four meters high will persist in the Andaman Sea, so all ships should proceed with caution and small vessels should remain in port.

Conditions are expected to return to start returning to normal on Friday, when the low pressure system currently over the Andaman Sea is expected to move to the Bay of Bengal and the high pressure over much of the rest of the will weaken.