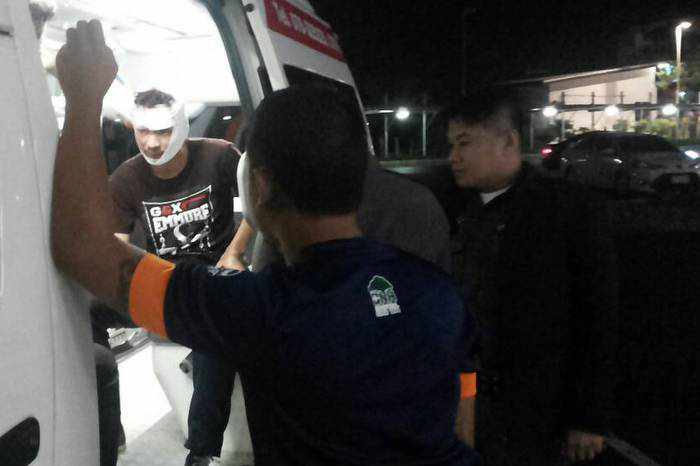 PHUKET: Police are searching for a gang of Phuket teenagers who reportedly attacked a security guard at Villa Market in Cherng Talay last night, leaving the guard with a four-inch gash in his head.

The security guard, Methee Yaemmen, 26, told police that he had no idea who the suspects were or why they would attack him.

“I went to the restroom while I was on duty. When I came out, a gang of about six teenagers approached me,” said Mr Methee.

“They jumped me and attacked me with a knife. I don’t know what kind of knife it was. I just lifted my hands up to protect myself because I didn’t know what else to do.

“I don’t know them and I don’t know why they would attack me. I don’t have problems with anyone.”

Cherng Talay Police officers and Kusoldharm Foundation rescue workers were called to the scene at about 8:45pm.

“When we arrived, we saw Mr Methee with cuts, some about four inches long, on his head and right arm,” said Lt Somsak Suwisan of the Cherng Talay Police.

Mr Methee received first aid at the scene before being transferred to Thalang Hospital.

“We are checking security cameras from Villa Market, and we have asked other shops to provide CCTV footage from their cameras so we can track down the suspects,” said Lt Somsak.