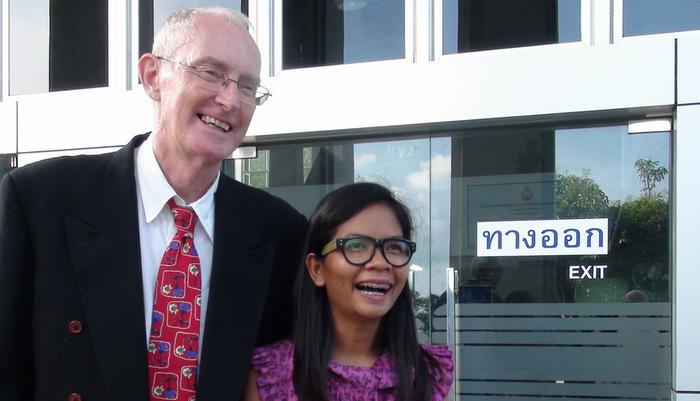 PHUKET: Alan Morison and Chutima Sidasathian of local blog PhuketWan were released on bail yesterday on charges of criminal defamation and other offenses in connection with a story they published on trafficking in Rohingya.

Mr Morison, an Australian, and Thai national Ms Chutima published a story last July that contained excerpts from a Reuters Special Report alleging that some Thai naval security forces worked with people smugglers to profit from the exodus.

The court ruled that the case against the two journalists should proceed and set the first hearing for May 26.

They were detained several hours while bail was processed. Bail was said to be posted on their behalf by the ‘Andaman Community Rights and Legal Aid Centre’. The accused had made repeated claims over several months that they themselves would not pay bail as a matter of principle.

Two Reuters journalists, Jason Szep and Andrew RC Marshall, won a Pulitzer prize on Monday for a year-long series of stories on the Rohingya written from Myanmar, Thailand and Malaysia.

The complaint against PhuketWan was filed by a naval officer based in Phuket.

The officer has also filed a criminal complaint against Reuters, Mr Szep and another Reuters journalist, Stuart Grudgings, alleging violations of the Computer Crimes Act. That complaint is believed to be under review by Thai authorities, a Reuters spokeswoman said yesterday.

Reuters has not been charged and stands by its reporting, she said.

“Our story was the product of extensive reporting and is fair, balanced and contextualized,” the spokeswoman said.

Mr Morison and Ms Chutima face up to two years in prison on the defamation charges and five years for offenses under the Computer Crimes Act.

An officer at the Phuket Provincial Court this morning affirmed that the Phuket Gazette is not permitted to report any testimony during the trial.

“The media can report who arrived on which days to testify, but no statements given in court can be publicly reported until the trial has concluded,” the officer said.

Phuket’s mainline English-language media have not voiced an opinion on the case.

Shady Business: Phuket beaches kept out of the sun

Celebrity comedian Teng a no show for Phuket Town