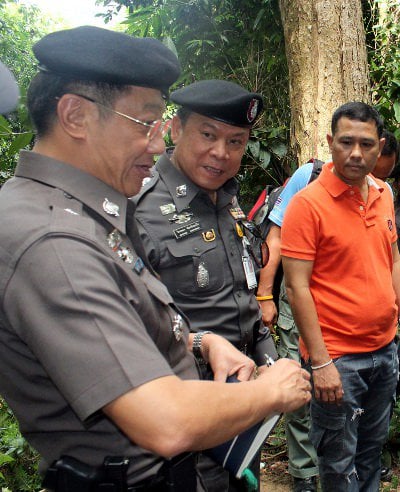 PHUKET: A nationwide manhunt was launched for the alleged executioner of Hungarian businessman Peter Reisz, whose body was found hidden with hands bound in a rubber plantation on Patong Hill on November 29.

“We have contacted every local police station on the island, and immigration offices nationwide, with information about the arrest warrant for dual Israeli-Hungarian national Moshe David,” said Phuket Police Commander Choti Chavaviwat on Sunday.

An arrest warrant was issued earlier on December 2 for the chief suspect, Mr David, who was allegedly Mr Reisz business partner in Koh Samui.

“After getting into a fight with Mr David, Mr Reisz told Koh Samui Police that he feared for his life,” explained Thung Thong Police Superintendent Kraithong Chanthongbai.

The current investigation has already revealed that at some point Mr Reisz allegedly forged Mr David and Mr David’s mother’s signatures on documents related to the sale of land valued at about 15 million baht, Maj Gen Choti explained.

Police are currently seeking Mr David for only two charges: the murder of Mr Reisz and concealing the body. However, police may bring more charges against Mr David, Col Kraithong said.

At the press meeting on December 2, Gen Choti outlined the events leading up to the disappearance of Mr Reisz.

“On November 24 at about 2pm, Mr Reisz went shopping at a Tesco Lotus, and finished in time to accompany Mr David to a construction supplies shop in Thung Thong, Kathu, at about 5pm,” Gen Choti explained.

“At the construction supplies shop they bought black plastic bags, door fixtures and other house ‘do it yourself’ items,” Maj Gen Choti said.

“We believe that Mr David may have rented another house in Thung Thong,” Gen Choti added.

The white Toyota Vigo belonging to Mr Reisz was recovered in Samui, though its plate number had changed and it was found sporting a red plate, Thai media reported yesterday.

Police intend to question Mr David’s wife, who they have contact information for, but who is not being held.

Though DNA test results comparing samples found in Mr Reisz’s rented room in Sri Soonthorn, Thalang, and those from his body have yet to confirm a match, Col Kraithong said that police were now confident the body recovered was that of Mr Reisz.