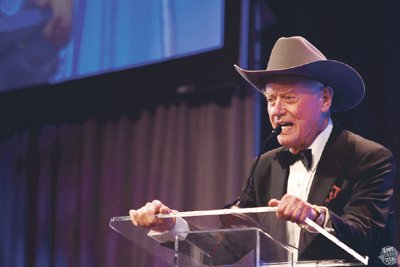 PHUKET: News reports from around the world have lamented the passing of the actor Larry Hagman, who was best known as TV villain JR Ewing.

Now trending across the world-wide web, it’s somewhat surprising how global the JR brand still is, despite being missing from the airwaves for more decades than I care to count.

Villains, tycoons, bad guys, and all around ultra entrepreneurs, the world has a love-hate
relationship with those men (and women) at the top, whose sinister dealings stop at nothing for a few dollars more.

From the fictitious Gordon Gekko in Wall Street (the movie) to a hair-challenged Donald Trump, almost everyone secretly loves a successful billionaire. Even if they have to idol worship in the privacy of their very own home. I guess everyone has their own personal guilty pleasures.

There was a time when Phuket loved the luxury set. We even had our very own chronicle of the day; the Indigo Real Estate Magazine. Kudos to Nick Anthony for presenting the glossy, which to this day, comes up in conversations far outside of the Kingdom, as a reference point about the island lifestyles of the rich and famous.

Now of course, we have the blogs with the good, the bad and the ugly; we ‘like’, ‘unlike’ or crawl into a cave (or the nearest pub). The sound of early morning ‘Tweets’ wake us up and damned if anyone can say what’s the point of Pinterest please explain?

All of a sudden Phuket’s celebrity skin is under a microscope. The bold and beautiful now equate to over the hill Hollywood B-list celebrity Paris Hilton, who is being recruited for the contentious Sydictive Element New Years Eve bash at Surin Beach.

While the preposterous figure of 50,000 attendees is being touted, perhaps they could relocate the Phuket International Airport (HKT) departure lounge to Surin, as the crushing high season volume of charter flights could easily top that figure.

Just this morning on YouTube, a Dallas-like drama is unfolding as the event organizers are now going on the offensive with an interview by the promoter Jirat Petnunthawong who is singing out the benefits of living big.

Where is JR when we need him? He’d be able to sort out this mess, but unfortunately he remains dead.

For the moment at least.

If the Surin organizers really want to capture worldwide attention they’d drop the ditsy Paris in favor of a cremation of a symbolic JR.

Theme it like a Viking ceremony and burn the effigy at sea in a blaze of glory. How many YouTube views would that get?

Later, with the announced floating stage off the beach, perhaps even arrange a resurrection. I mean, with all the modern miracles of science couldn’t we get JR back?

Phuket needs a holiday miracle. This year we are again about to enter another media flurry with the Hollywood premiere of the tsunami movie The Impossible.

While up in Bangkok there are more reds and yellows than a contentious hard fought London football derby.

The battle is on for what will be the headline of the year for our island. It’s nose to nose and entirely possible that a play from left field may show up, which no one saw coming.

My head feels like it’s in a vice with one of those horror movies bad guys slowly tightening the screws. All this pressure over what exactly may go wrong.

Thinking back to JR for a moment I am reminded of one of his most eloquent quotes: “A conscience is like a boat or a car. If you feel you need one, rent it.”

Love them or hate them, villains remain a colorful part of our collective existence. The more we hate them the more we love them.

Bill Barnett is Managing Director of C9Hotelworks and can be contacted through C9hotelworks.com.