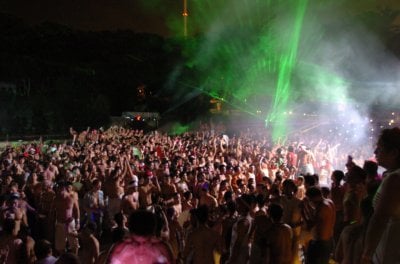 PHUKET: Nation VI, billed as Asia’s largest gay and lesbian party, will be held at the Hilton Phuket Arcadia Resort & Spa from October 20 to 22.

Held since 2001, the annual event has grown from a one-night party in a disused theme park in Singapore to an international multi-day festival of gay and lesbian pride.

Last year’s party, the first one to be held outside Singapore, was held in Kata-Karon and attracted 2,000-odd partygoers from Thailand and around the world.

Day 1 of Nation VI kicks off at 4 pm with a fundraising event in support of the Rainbow Sky Association of Thailand. This will be followed by an 11 pm to 6 am set called the “Military Ball” – not a reference to the coup in Thailand – by Argentinian-born tribal house DJ De León.

The headline party on Day 2 will be another all-nighter – the Danse Royale – this time by the legendary writer, producer and DJ Tony Moran from the USA.

As stated on his website – www.djtonymoran.com – Moran has written and remixed for Donna Summer, Becky Baeling, Britney Spears and Beyoncé Knowles, and “has turned out dance floors from Tel Aviv to Rio de Janeiro, New York to LA, and just about everywhere in between.”

Day 3 features the Pirates Paradise Pool Party by UK DJ Severino, from 4 pm to 8 pm, and Hot Couture by Taiwan’s David S and Victor Cheng from 11 pm to 4 am. The day ends with the farewell Feelin’ Good party, from 4 am to 8 am, by Australia’s Kate Monroe who played at last year’s event.

Running concurrently with Nation VI and also in Karon will be W@Nation, presented by the Two Queens Party, the monthly all-women’s party organizer in Singapore.

The organizers of the three-day W@Nation event say they are presenting the largest entertainment line-up ever assembled for any women’s program at Nation in its six-year history.

Dr Stuart Koe, CEO of Fridae.com, organizers of the Nation V party, said, “Since its inception, Fridae has empowered thousands of gays and lesbians to connect with one another, find information relevant to their lives, and meet others online and offline for friendship, networking and much more.”