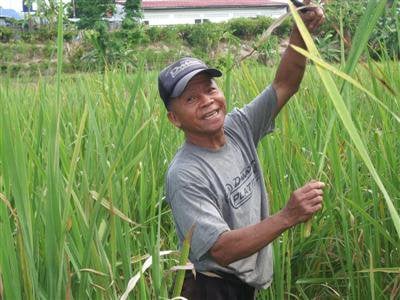 PHUKET: A rare type of wild rice introduced to Phuket more than 60 years ago is in danger of disappearing from the island, officials say.

“The main cause of the falling number of farms is people selling off their land to real estate companies or landlords trying to profit from water resources in other ways,” he said.

Sod Roongsawang is the 72-year-old owner of one of the two farms that grow the crop. He first planted kapek around seven years ago.

Although the crop has not made him rich, it has provided him and his family with a good living, he said.

“In the wet season I earn around 1,000 baht per day. In the dry season there’s not enough water and a lot of rats, but I never earn less than about 300 baht a day,” he said.

Mr Sod’s family sells kapek in markets at 20 baht per bunch of eight stems. It sells out every day, he said.

“I’ve supported my children’s education right through to graduation just by selling kapek,” he said.

Mr Pradub said a small number of households grew the rice for their own consumption, though not for trading.

“There’s quite a large chance kapek will become extinct in Phuket,” he said.

Kapek has been cultivated in Kathu for a long time, where it is still available in restaurants and some markets.

“I think farmers who have suitable land should grow it because it provides a very good income and has no natural pests, except rats,” Mr Pradub said.

Kapek is known as nor mai nam in Central Thai, which means ‘water bamboo’. Its Latin name is Zizania latifolia Turez.

Originating in China, it is one of only four types of wild rice in the world.

People do not eat kapek grains, but its stems. These are cut above the roots and the tops are sliced off, leaving a piece around 10 inches long.

Nipa Manakarn, a nutrition teacher at Phuket Vocational College, said only the white material on the inside of the stem is edible.

“The best way to cook kapek is stir-fried with oyster sauce, mixed with any kind of meat you fancy,” she said.