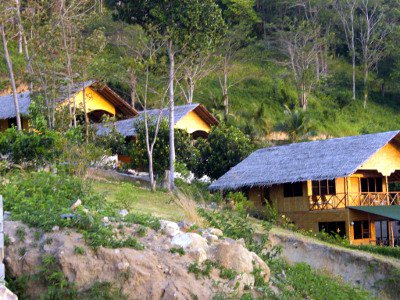 The body was identified as 61-year-old Ursula Balzan by her relatives who lived nearby on Koh Maphrao.

Her neck was broken and there were bruises around her body and mouth.

Officers told the Phuket Gazette that her body was found floating near Koh Mali, a small islet near Koh Maphrao.

Ms Balzan’s sister, Jacqueline Erni, 54, explained the circumstances to the Gazette after being interviewed at Phuket City Police Headquarters today in Phuket Town.

“We were away for a short time and she was staying on the island. On June 15, I gave her a phone call at about 2pm and she said everything was okay. It was the last time I spoke to her,” Mrs Erni said.

“We came back the next day, [yesterday, June 16], at about 3pm. It was strange because normally she feeds the dog but there was no food left out.

“Also, the dog had to be given medicine, but the medicine was still there. We were looking around the house and areas nearby when I got a call saying a body had been found,” she said.

Ms Balzan was retired and lived with the Erni family for a year before moving into her own house about four months ago, Mrs Erni’s daughter, 21-year-old Lee Erni, said.

Their houses are about 50 meters apart, situated among a group of 10 houses on top of a hill, she added.

Staff at the Maphrao Camp Belvedere resort today confirmed to the Gazette that Ms Balzan had stayed at the resort for about 16 months.

Phuket City Police said that Ms Balzan was found in a bathing suit.

En Ruengsamut, a 39-year-old laborer who works at the housing project, said that Ms Balzan regularly went for a swim with the dog about one kilometer from her house, but she did not take the dog on the day she was found.

“Normally she wakes up at about 8am, but on the day she died it was strange because I didn’t see her around her house until noon. I didn’t want to disturb her [in the morning],” Mr En said.

“My friend saw her body while he went out to work on Koh Panyee and he called the [Rassada] municipality. Her body was taken to Vachira Phuket Hospital where it was later identified by her family,” he added.

“A doctor at Vachira Hospital said that it was strange because she got a very, very hard hit on the head.

“If she hit something hard when she jumped into the water she would have had to jump 20 meters down and hit something heavily,” she suggested to the Gazette.

“Also, we don’t know what time she died, so we will send her body to Surat Thani for an autopsy today or tomorrow, as soon as possible.

“The autopsy will take one day,” Mrs Erni added.