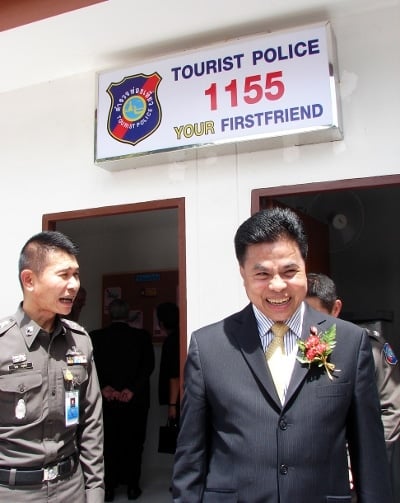 PHUKET: Tourists seeking contact details of Phuket’s honorary consuls is the number one reason why they call the Tourist Police hotline 1155.

From January 2010 to May 2011, the 1155 hotline received 8,512 calls, with 1,860 of those calls asking for directions to and the location of honorary consuls’ offices, an officer at the Tourist Police hotline center told the Phuket Gazette.

Other reasons for tourists calling the hotline were logged as: seeking advice for lost property and documents (918 calls); having problems with hotels, shops and restaurants (917 calls): seeking help communicating with taxi drivers (863 calls); and asking for information about local tourist attractions (760 calls).

The news came as Ministry of Tourism and Sports Permanent Secretary Sombat Kuruphan yesterday chaired the official opening of the Tourist Police headquarters on Yaowarat Road in Phuket Town.

Mr Sombat said that Phuket’s tourism industry generated about 90 to 110 billion baht a year, justifying the need for building the new headquarters for Tourist Police.

“Tourist Police officers and volunteers help make this station a quality working network. It will be a model station for Tourist Police around the country to learn from,” he said

Mr Sombat also urged tourists in trouble to call the 1155 hotline, which is available 24 hours a day.

Lt Col Ekachai Pramanakul, Inspector and chief of the Phuket Tourist Police, said his officers were ready and willing to help tourists, as promoted by the hotline’s slogan: “1155 Your First Friend’.

“If it’s your first visit to Thailand and you don’t know who to call when having a problem, call 1155 anytime – we are waiting to help you,” he said.

The Phuket Gazette lists contact details of 17 honorary consuls on the island in our Gazette Guide. Click here for details.

Phuket Poll: What is your favorite chain of convenience stores on Phuket?