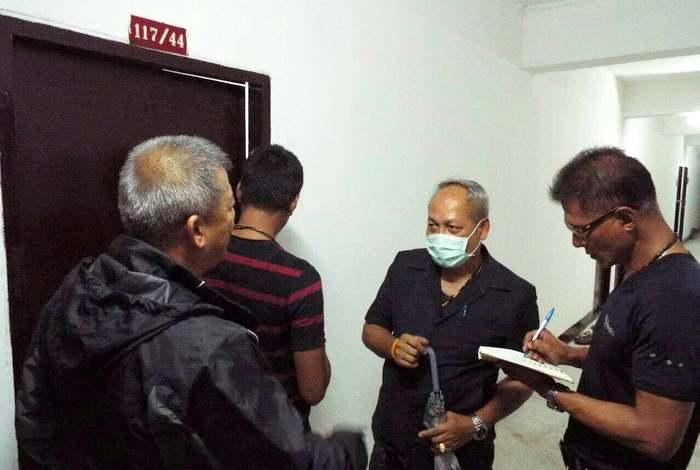 PHUKET: One man is dead after being discovered by his lover’s boyfriend on the second floor of the Irawadee condo in Kathu.

Wachaya Thepsing, 29, fled to Trang province and alerted police there of the murder of her former lover. Kantang Police then contacted police in Kathu, informing them of Ms Wachaya’s report, said Lt Sawanya Eiattrong of Kathu Police.

“When we arrived at the room, we found the door locked,” Lt Sawanya said. “When we unlocked the door, we saw the body of a shirtless man, whom we’ve identified as Metha Kaowadee, 36. He was only wearing shorts and had been stabbed three times. His bleeding head appeared to have been hit with a blunt object. We assumed he had died within the past 12 hours,” Lt Sawanya said.

Ms Wachaya reported to police that about 1am yesterday, Mr Metha, her ex-boyfriend, had visited her room. After that, her current boyfriend, Suriya Kruakaew, 39, returned and found Mr Metha and Ms Wachaya in flagrante.

The two then reportedly escaped to Phang Nga on Ms Wachaya’s motorbike. Ms Wachaya told Kantang Police in Trang that after they arrived in Phang Nga, Mr Suriya parked and fled away alone, on foot.