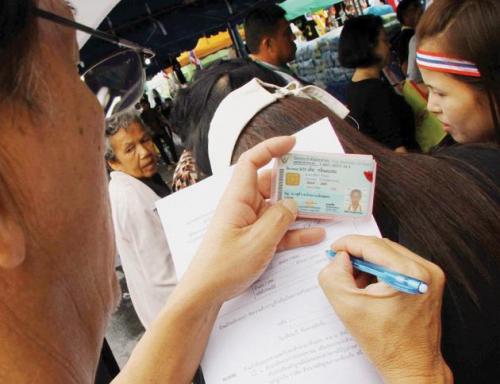 
Pheu Thai braces for the worst
The Nation / Phuket Gazette
PHUKET: The ruling Pheu Thai Party is preparing for the worst-case scenario on Wednesday when the Constitutional Court announces its ruling on the proposed amendment of the Constitution, a decision that could bring the government down.

The opposition Democrats and some senators have asked the court to rule on whether the bill to amend the Constitution, which was sponsored by 312 lawmakers, is lawful.

Last week, key members of both Pheu Thai and the Democrats analysed possible scenarios for the court’s judgement. Both agreed the chances that the court would hand down a verdict that is in favour of the government were very slim.

Pheu Thai chief Jaruphong Ruangsuwan said yesterday that he was worried about the court judgement, as it might pose a risk to the party and eventually seal the fate of the government under Prime Minister Yingluck Shinawatra.

One is for the court to pronounce the charter amendment unconstitutional and order the process stopped, even though Yingluck has already submitted the amendment to the Palace for royal endorsement. The second would extend the first option by requiring the 312 MPs and senators who sponsored the charter-amendment bill to take responsibility.

The third would be for the court to rule the amendment unconstitutional on grounds that it attempts to change the country’s system of government. The court could then dissolve the ruling parties that supported the amendment, including Pheu Thai, and ban their executives from politics.

That means four political parties would be disbanded and 55 politicians banned for five years, including 19 executives of Pheu Thai, 11 of Chart Thai Pattana, 17 of Chart Pattana and eight of Phalang Chon. Among them, four are ministers – Pheu Thai leader Jaruphong, his deputies Kittiratt Na-Ranong and Plodprasop Suraswadi, plus Phalang Chon leader Sontaya Kunplome.

Yingluck could survive the ruling, but the Democrats would pressure her to take responsibility, said a senior Democrat member, who has joined in the rally at Democracy Monument.

“Democrat MPs have warned her to delay the submission [of the charter-change legislation] for royal endorsement, but she decided to rush the process. She cannot deny responsibility,” he said.

The key concern is that four or five top Pheu Thai Party executives are among the 312 lawmakers who sponsored the charter change.

Three of the nine justices are likely to have dismissed the petition citing a lack of authority to rule on the constitutional amendment, Pheu Thai experts said. They are Chut Chonlavorn, Boonsong Kulbupar and Udomsak Nitimontree.

The new member, Twekiat Menakanist, might also excuse himself or abstain from voting, as he has not worked on the case from the beginning. The ruling could then come down to the opinions of five justices, they said.

If the court ruling favours the opposition, it could calm protesters led by senior Democrat Suthep Thaugsuban. But red-shirts would probably take to the streets instead.


Police search for weapons amid claims of armed men
The Nation / Phuket Gazette
PHUKET: Deputy Prime Minister Pracha Promnog has confirmed reports that armed men have been found among protesters in the South rallying against the government.

“Police have already arrested two Cambodians for carrying guns at a the protest site of rubber farmers in Prachuap Khiri Khan,” he said yesterday, adding that it was of serious concern to the government.

Yesterday, about 20 policemen searched several tents at the Bangkok-based rally led by the Students and People’s Network for Thailand’s Reform, but no weapons were found at the site.

There are now many rallies against the Yingluck Shinawatra-led government. Former Democrat MP Suthep Thaugsuban leads one of the biggest rallies in Bangkok.

The Democrat Party’s deputy spokeswoman Mallika Boonmeetrakool, who apparently doubted Suporn’s words, demanded that authorities make arrests within two days, if they could prove weapons were at the rally site.

“Otherwise, we will hold that the current government has lost its legitimacy to maintain peace and order in the country,” she said.

As of press time, Pracha offered no details on the arrests made in Prachuap Khiri Khan.

Pheu Thai spokesman Prompong Nopparit, meanwhile, said he had received information that hundreds of hardcore protestors in the southern provinces of Surat Thani, Chumphon, Songkhla and Nakhon Si Thammarat, were being mobilised to join the Suthep-led rally.

“If there is any violence, Suthep and his gang must take responsibility,” Prompong said.

Ekanat Prompan, a spokesman for the Suthep-led rally at the Democracy Monument, said dozens of thousand people had signed their petition to impeach 310 MPs who voted in support of the amnesty bill.

The highly controversial blanket-amnesty bill sailed through the House of Representatives at dawn on November 1, prompting public outrage. Thousands of people have since taken to the streets to show their dissatisfaction.

The Yingluck-led government has tried to appease the public by announcing that it will scrap the bill. Suthep, however, has continued his protest and called for more anti-Thaksin people to come forward. Yingluck is a younger sister of Thaksin Shinatwatra, the former prime minister who lost power following the 2006 military coup.

Suthep also urged people to show their dissatisfaction of the government by blowing whistles in the presence of government figures and Cabinet members.

Education Minister Chaturon Chaisang faced a large number of whistle blowers yesterday at a hotel in Nakhon Si Thammarat where he was presiding over a seminar.

Whistle blowers were also present at the Nakhon Si Thammarat Airport, when Chaturon boarded his flight. He also faced whistle blowers at a hotel in Bangkok.

Saksarit Sriprasart, a core member of the Student and People’s Network for Thailand’s Reform in Trang, urged local residents to blow whistles at Deputy Prime Ministers Niwatthumrong Boonsongpaisan and Kittiratt Na Ranong, who were scheduled to join a seminar in Trang between November 22 and November 24.

Yingluck, who is also defence minister, said she had recognised whistle blowing was a form of expression.